The Lowville Soldiers’ Monument was manufactured by the Monumental Bronze Company of Bridgeport, Connecticut and was dedicated on July 4, 1883. The monument, made of slurry-cast zinc, consists of a life-size Union soldier atop a pedestal base, a type identical to other catalog Civil War memorial figures.

Work was carried out on the monument in 1988, at which time it was filled with concrete. This led to negative interactions between the zinc and concrete, expansion by entrapped water during freeze/thaw cycles, and leaching of un-reacted lime, forming calcite on the surfaces of the zinc. Cracks, losses in material, sagging and deformed metal, open joints, and calcite deposits were the result, bringing the structural integrity of the statue into question and putting visitor safety at risk.

We were contracted to perform an on-site assessment, highlighting the changes from a previous examination and the current condition of the materials. Observations were made from the ground and a bucket lift. From this, we recommended the implementation of treatments that would first reverse previous repair efforts so that conservators could then proceed to the conservation stage. This would require removal of the concrete, followed by restoration of the zinc to repair both recent deterioration and any earlier disrepair, and finally, reconstruction of the monument with a new support system 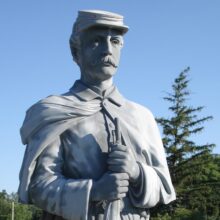 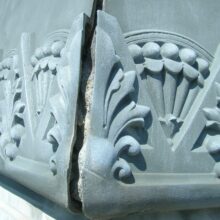 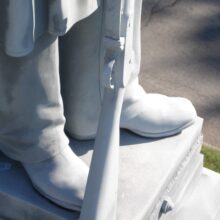 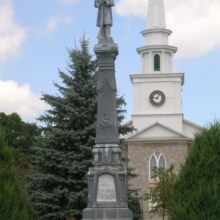 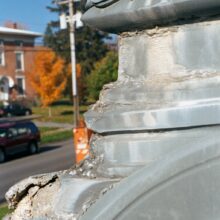