A matching pair of zinc peasant male and female figures were damaged during a fall. The brittle metal broke at vulnerable points at the ankles and small pendant castings. In addition, the original iron armature had deteriorated after a century and a half of exposure. Sculptured surfaces were also pitted and discolored from oxidation.

We carefully disassembled the works into original cast components. The existing armatures were cleaned and protected with a corrosion inhibiting coating. New stainless steel supports were fed into the interiors without damaging the sculptures and installed to support the statues through the fragile legs and damages to the bases. Fragments were then reattached with stainless steel pins and/or soldering. Minor losses were reconstructed with synthetic metal-bulked fills. The repaired works were thoroughly cleaned and the patina was touched up chemically to match the existing original before the works were returned to the owner’s garden. 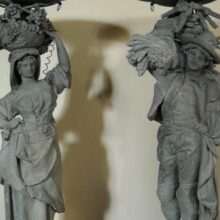 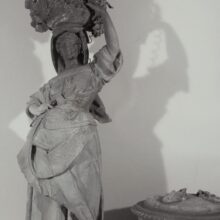 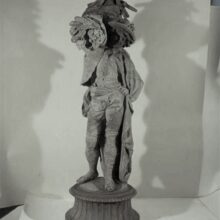 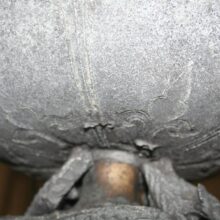