Fellowship In Times Of Isolation

Father Damien of Molokai and Mother Marianne of Molokai, were natives of Belgium and Germany respectively, but are best known for their care of lepers (sufferers of Hansen’s disease) of the Kalaupapa Colony. In 1866 Hawaii established a leper colony on the Island of Molokai, where approximately 8,000 Hawaiian were quarantined between its nineteenth century founding and 1969 closure. Father Damien, a priest of the Congregation of the Sacred Heart of Jesus and Mary, answered the call to serve the spiritual and medical needs of the people of Kalaupapa, improving quality of life by building houses and roads, creating a parish, and ministering sacraments. Father Damien’s respect for the innate dignity of each person was evident in how he lived, worked, ate, prayed, and suffered with the lepers – people who were feared, reviled and literally cast out of society. Damien of Molokai was championed by a great number of protestants during his lifetime, cited as a source of inspiration by Gandhi, and is recognized by Catholics as one of two saints who lived out their service to Christ at the Kalaupapa Colony.

Mother Marianne is known to have said “The charity of the good knows no creed and is confined to no one place”, a belief manifest in her early work in New York State where she taught immigrant children, and helped found hospitals with innovative attention to cleanliness and care for those pushed to the margins of society including addicts and those who could not pay for treatment; and in the work by which the world knows her: answering the plea of Hawaiian King Kalalaua to help care for Hawaii’s lepers.

When Mother Marianne arrived on Molokai Father Damien’s leprosy was advanced and his death near. The saint who would succeed Father Damien’s work, building clinics and loving those orphaned and afflicted on the island for decades to come, personally dressed the wounds of the dying saint. The red scarf serves as an arm sling and an attribute in representations of St. Damien, was a gift from St. Marianne Cope, who knew well the healing power of beauty.

A photograph captures Mother Marianne at the deathbed of Father Damien on April 15, 1889. Careful examination of this historic photograph, conversations with the Sisters of St. Francis in Hawaii, research of period specific habits and vestments proper to the mural subjects, and awareness of the theological import of the age and condition in which saints are represented, were a vital part of the design process to ensure the new artwork would be beautiful, historically accurate, and invite those who encounter it into contemplation and imitation.

The Cathedral Basilica of Our Lady of Peace, originally dedicated in 1843, is a historic gem in downtown Honolulu. At the dawn of the twenty-first century the interior elements of the nineteenth century Cathedral had fallen out of relationship with each other due to insensitive post-historic campaigns.  In recognition of the Cathedral’s newly conferred Basilica status the diocese undertook a long-term effort to create a harmonious liturgical artistry program. Collaborating closely with Bishop Silva, Brother William Woeger, Mason Architects, and RDG Planning and Design, EverGreene Architectural Arts designed a phased renewal program guided by the architecture of the building, artwork seen in historic photographs, and treatments revealed in the historic finishes investigation.

The most recent phase of historic restoration included plaster restoration and painting, reinstatement of lost decoration on the altar wall, glazing and polychromy, marble cleaning, and marbleizing (application of a faux finish), to harmonize the discordant interior. The most exciting element of this phase was the long-awaited design and creation of two new murals honoring St. Damien of Molokai and St. Marianne Cope. The murals were designed and painted in EverGreene’s Brooklyn studio and now grace the sanctuary altar wall, replacing post-historic symbols that were out of scale with the architecture.

At this time of pandemic and fear, the saints honored at the Cathedral of Our Lady of Peace remind us of the call to sacrificial love for those cast to the fringes of society.

“Amen, I say to you, whatever you did for one of these least brothers of mine, you did for me.’ —Matthew 23:39 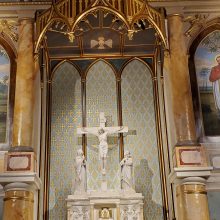 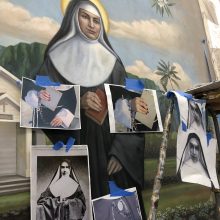 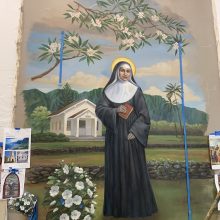 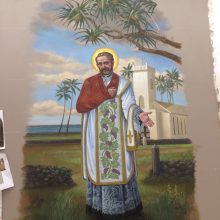 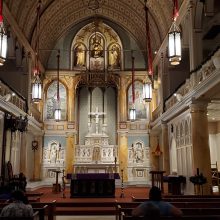 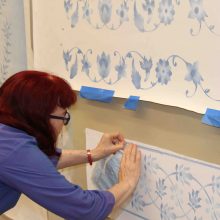 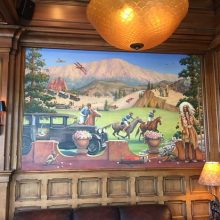 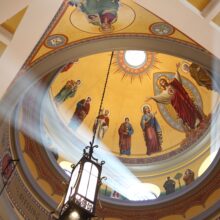 Cathedral of the Most Sacred Heart of Jesus