LHAT’s annual conference is the largest annual gathering of historic theatre professionals, community leaders, and service providers and suppliers, attracting participants from across the U.S. and Canada for idea sharing and network building. Professionals, volunteers and devotees join together for four days of networking and peer information exchange, tools & techniques sessions, and tours of local historic theatres, plus events, banquets and receptions.

John Bell often tells a story about the painstaking efforts his team went through to maintain the authenticity of their historic theatre – right down to the stuffed Macaws in the Lobby. His story illustrates an institutional philosophy of restoration that embraces and celebrates the intentions of the original architecture of this quintessential movie palace designed by the great atmospheric theatre designer, John Eberson. John Bell, restoration expert Jeff Greene and architect Scott Cryer will present the process by which the project team executed this philosophical vision.

The restoration team used many research tools and methods to uncover the original color palette of the space including high quality archival photos; essays and letters from Eberson and his son Drew; intense study of existing documentation; and forensic research conducted within the theater itself. The team even investigated, with cameras rolling, an original seat to reveal a dramatic finish and conducted a plea to the public to see if anyone could recall the earliest days of the theater.

Driven by the overarching vision to respect the original design intent, various team and community workshops and multiple planning sessions involving the staff, architectural team, contractors, and various specialists, all contributed to the success of this project. With a better understanding of Eberson’s intent and how that would manifest into a finish palette, the next challenge was to convince a community, who had lived with the modified theatre for several decades, that Eberson’s original design did not include a red interior. Bell and Cryer will explain how they delivered this message to key stakeholders, and they will share the positive reaction that the now historically accurate interior has received from the community.

Join us with LHAT  this July to learn more about this amazing renovation project! 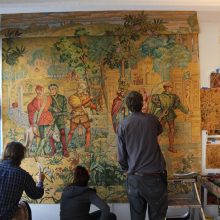