Painting Color Into Places of Worship

I was either lucky enough or maybe crazy enough, to move to New York City amidst the global pandemic. However, with the promise of an office set up with COVID precautions and an in-person internship at EverGreene, the decision was easy. In January 2021, I packed my bags and took the flight out from Omaha, Nebraska, to New York City, a place I had only visited once before.

My first tour of the office space led me down to the mural studio on the 4th floor of EverGreene’s Industry City-based headquarters. I opened the door and was completely awestruck! Before me were fantastic murals hung from floor to ceiling, with scaffolds surrounding them. Although the artwork was only halfway completed, I was stunned and amazed by the murals for St. Vincent de Paul in Germantown, PA. I continued to escape to the mural studio daily to keep up with the process. I watched bit by bit as the murals were quickly completed, rolled up and sent off to be installed on-site, and now I’ve witnessed photographs of the murals installed in their rightful home.

My mind hasn’t been able to remedy my parting from these masterpieces quite yet. I stumbled across a voice recording of Fr. Sylvester explaining the mission of St. Vincent de Paul: “to promote unity and diversity, and how they sought to reiterate this in their new murals by moving away from Euro-centric art.” EverGreene’s team worked closely with the church to curate a list of highly-revered, spiritual leaders that did charitable works for the poor, made great strides for the African-American community, and represented marginalized groups. To truly appreciate the thoughtfulness within each mural, I’ve compiled a breakdown with short descriptions of the individuals depicted. 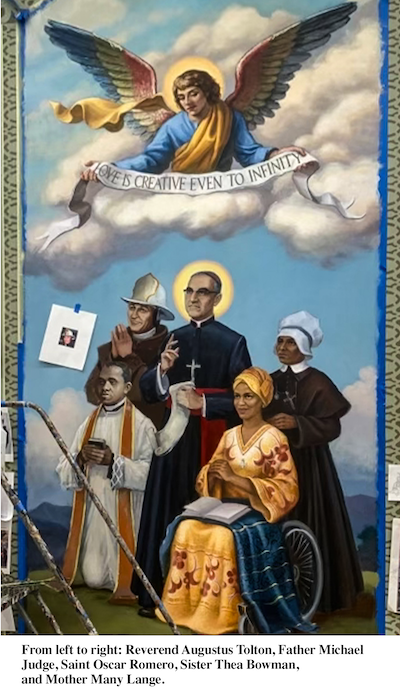 Reverend Augustus Tolton was a former slave who was baptized as a Catholic. He is the first Catholic priest in the United States to be publicly known as black at his ordination in 1886. Father Michael Judge was an American Franciscan Friar and ordained priest. He was the chaplain to the New York City Fire Department, as well as the first certified fatality of the September 11, 2001 attacks. It later became known that he was gay, so he is honored for his service as well as a representative for the LGBT+ community of SVdP. Saint Oscar Romero was a Salvadoran Roman Catholic archbishop. He was outspoken against violence encouraged by the United States that was affecting his community. He defended the poor and opposed pressure from the government until his assassination, making him a martyr. Sister Thea Bowman was a Roman Catholic religious sister, teacher, and scholar. She helped found the National Black Sisters Conference and advocated for increased representation and support of African-American women in Catholic religious institutes. Her cause is up for canonization, and she is currently designated as a servant of God. Her image shines brightly in the St. Vincent de Paul murals, as she was, and continues to be a light for Catholics. Mother Mary Lange founded the Oblate Sisters of Providence, which was the first African-American religious congregation. She was also the first African-American mother superior. Her case is currently up for canonization, and she is currently recognized as a Servant of God. 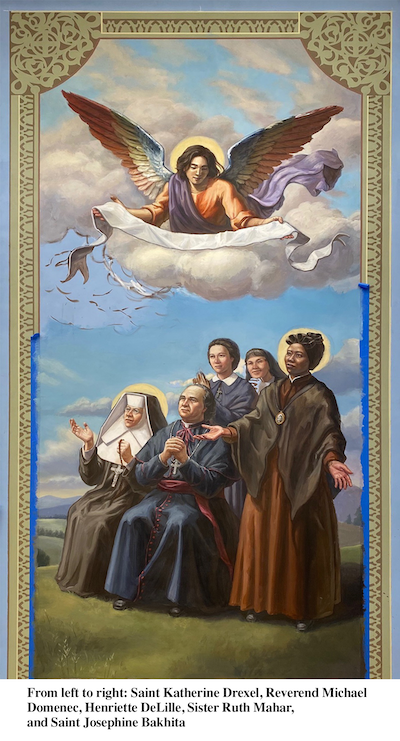 St. Katharine Drexel founded 50 schools for African-Americans. She was canonized in 2000 and is well-known in Philadelphia and around the world for her selfless service. Reverend Domenec was the second Roman Catholic bishop of the diocese of Pittsburgh, PA, as well as the founding pastor of St. Vincent de Paul. He persevered through great opposition against the church. Henriette DeLille is from New Orleans, Louisiana, and founded the Sisters of the Holy Family. She was the Mother Superior there, making her the second African-American to serve in such a high position. The cause for her canonization is open, and she was declared venerable in 2010.  Sister Ruthie worked at St. Vincent de Paul, but recently died and is remembered both in the hearts of the parish members and through this mural. St. Josephine Bakhita was enslaved in Sudan and brought to Italy, where she was eventually freed. She converted to Catholicism and joined the Canossian Daughters of Charity religious order. Bakhita left behind a legacy of transformation through suffering and is an inspiration to the community. She was declared a saint by Pope John Paul II in 2000. 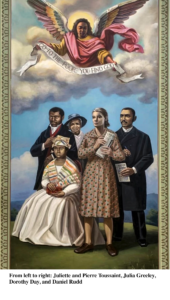 Juliette and Pierre Toussaint were freed slaves who opened an orphanage, employment bureau, and refuge for travelers in their home in NYC. Because of these and many other charitable works, Pierre was declared venerable by Pope John Paul II and became the first layperson buried in the crypt of St. Patrick’s Cathedral on Fifth Avenue. Julia Greeley, known as Denver’s Angel of Charity, was a black enslaved woman who was freed by the Missouri Legislature. She aided numerous families in poverty throughout her life. Dorothy Day was a social activist and journalist who practiced civil disobedience, similar to Oscar Romero. She co-founded the Catholic Worker Newspaper and is currently recognized as a Servant of God. Daniel Rudd was a Catholic journalist and Civil Rights Leader. He started the Ohio Tribune, which grew into American Catholic Tribune, the first Black-owned Catholic newspaper. 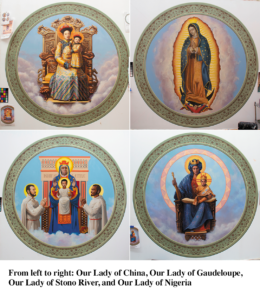 EverGreene additionally painted four medallions to surround the large mural on the nave ceiling of the Church. These medallions honor Mary with Madonnas inclusive of the congregation: Our Lady of China, Our Lady of Guadeloupe, Our Lady of Stono River, and Our Lady of Nigeria. The first martyrs of the Church were the Vincentians John Gabriel Perboyre and Francis Regis Clet, who were hanged and strangled in Wuhan, China. Our Lady of China was chosen to tie back to this origin. Our Lady of Guadeloupe was selected because it is the most famous and recognizable Latino image. Our Lady of Stono River, the model that was used for the early slave revolts, embodies St. Vincent’s very active, strong and progressive African-American agenda. Finally, Our Lady of Nigeria represents the largest African contingent of the church.

Working with the Marketing Department, I realized this work tied in perfectly to the Black History Month theme of 2021, “Black Family: Representation, Identity and Diversity”. St. Vincent’s is actively striving to recognize African-American individuals and their impact on the Catholic Church. This gives me hope for all of the parishioners of the church. Being able to relate and see a representation of the community will strengthen relationships with God, self, others, and creation. I couldn’t agree more with Father Sylvester’s sentiments, “I can’t wait until the pandemic is over and the people are back, they’ll be thrilled!” I can only hope the parishioners will enjoy the artwork as much as I loved experiencing the processes of their creation!