The “History of Transportation” mural, located on three walls of the 10 Rockefeller Plaza lobby, was painted in oil on canvas with gold and silver leaf by Dean Cornwell in 1946. Cornwell was an accomplished illustrator and painter, his technique being subtle but very effective. It appears that he applied the silver and gold-colored leaf to the canvas, then the details of composition were applied on top of the leaf with a cartoon and pounced with charcoal–in some areas, the pounce marks are still visible.

Upon our conditions assessment, we found the mural to be in stable condition but with a heavy accumulation of surface dirt and grime. There were several locations where the canvas had small deformations or planar distortions, most of which were stable. There were small blemishes, retouchings, and pinpoint paint losses. The lower half of the mural was “sounded” to assess the stability of the plaster substrate and determine if there were structural issues. Its canvas was well attached, except in a few locations along the lower horizontal margin. The surface of the paint layer and leaf were examined in normal and ultraviolet light to identify the level of past intervention. The red field had been completely repainted; however, the leaf appeared to be original, with some original glazes but also some post-historic coatings.

Our team of highly skilled conservators reattached delaminating canvas at the seams and consolidated areas of paint delamination occurring to post-historic field paint. The entire mural was surface cleaned with an aqueous solution, areas of loss were infilled and inpainted. A variety of different surfaces and conditions required slightly varying cleaning agents, to which our conservators responded as necessary with the most appropriate methodology on site. 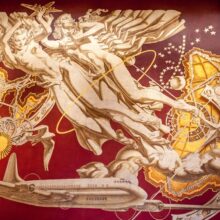 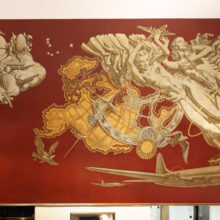 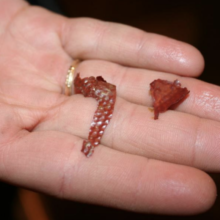 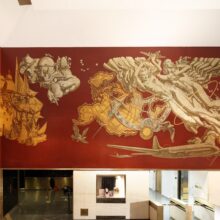 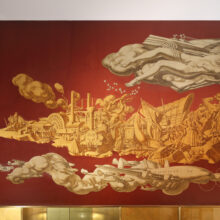 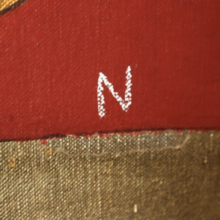 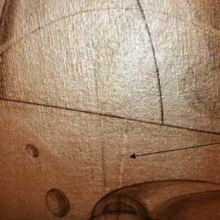