Cranes Rising was sculpted in 1934 by Anna Hyatt Huntington, an artist based in New York who had a successful career at a time when few women were acknowledged as artists. Cranes Rising depicts six cranes in various stages of flight arising from a stone. The statue is cast in bronze and stands approximately 45 inches tall and 23 inches wide.

The Arts Properties of Columbia University enlisted us to treat the minimal damage on the sculpture caused by the deployment of a fire prevention system within Columbia University. This resulted in areas of patina loss and corrosion associated with water damage. Further there was evidence that the statue had fallen at one point.

A bent beak and a large gap between the wings of two adjacent cranes were realigned by reinforcing/bracing and padding the sculpture and then applying pressure. To stop further wing movement a mechanical connection was added and the gap successfully filled and patinated.

Additionally, areas of corrosion and patina loss were cleaned, heated and chemically treated to blend with the current patina coloring. The final step was a coat of Renaissance wax to further protect the repairs and patina of the sculpture. 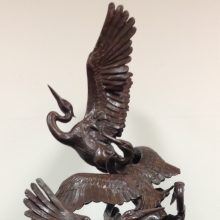 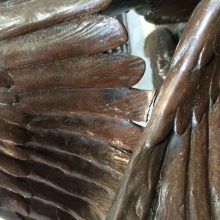 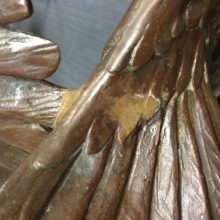 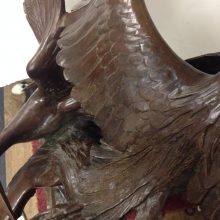 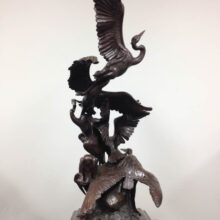