The Ariel Rios Federal Building is part of the Federal Triangle complex in Washington, DC. The building, designed by Delano and Aldrich and constructed in 1930, consists of two sweeping semi-circular sections, known as the North and South wings. The principal public spaces of the building are four identical lobbies. The double-height spaces are clad in cream Mankato dolomitic limestone, including decorative pilasters, cornice molding, and door surrounds. The light walls are offset by a dark Verde Antique marble baseboard.

The stone exhibited evidence of past treatments, including a whitish haze and prominent drips and streaks, which disrupted the original polished finish. Stones have been worn, fractured, and soiled from repeated contact in predictable areas where people tend to linger. Floor wax has splashed up the wall, trapping dark soiling. Varies tapes, used to hang temporary signage in the halls, have left tenacious adhesive residue and stains on the stone.

We were contracted to conduct a condition assessment of the lobbies, as well as perform on-site cleaning tests directed towards developing a specific treatment plan. Cleaning tests initially targeted specific conditions to better understand the nature of the phenomenon. We then directed tests to develop the most efficient treatment plan, in which the fewest products or techniques could be used to address the greatest variety of conditions. Testing also accounted for the practical variables of working in a federal building. This included using products that are low toxicity, maintaining a secure workplace, and staging work so that it would be of minimal disruption to the building. 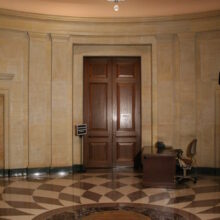 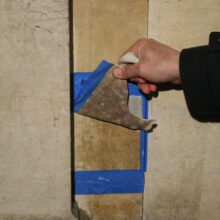 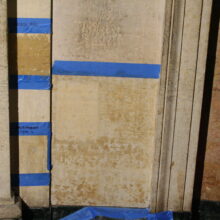