The Bailey Fountain is a grand Art Deco construction in the center of Grand Army Plaza, Brooklyn, NY. Sited behind the Memorial Arch at the main entrance to Prospect Park, the bronze and stone fountain depicts nude figures of a man and woman riding the ship of Brooklyn through an inland sea. Nerieds trumpet the ship and a lounging, Bacchus-like Neptune takes up the rear. The sense of movement was created by special sprayers that seemed to throw up spray at the ship’s prow as well at project high into the air above the assembly. The inland see is raised above the Baroque basin in a ring of rustic pink quartzite stones.

The fountain had suffered from deterioration and neglect when our conservators were engaged to assess the conditions, develop treatment plans and prepare contract documents for its restoration. The fountain had not operated for at least a decade. Many bronze elements had been lost or removed due to vandalism. One Neried was in storage, Neptune’s triton was lost, and the bronzes had suffered typical surface deterioration of outdoor bronzes. The quartzite had fallen or been lost and the copings were heaved and displaced, as was the adjacent pavement. The basin leaked and had been repeatedly coated with a pool paint.

All elements were inspected and documented, historic reseach was performed to determine the sculptor’s original intent and the original display design, new mechanical systems were engineered, and all sculptural and stone elements were cataloged and studied to determine a restoration plan. After approval by oversight agencies, the plan was developed into contract drawings and specifications which were implemented, resulting in the fountain finally again operatings as intended. 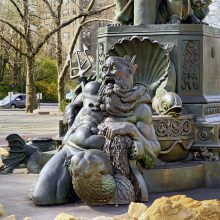 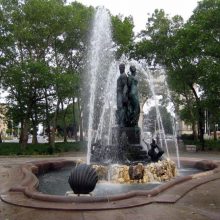 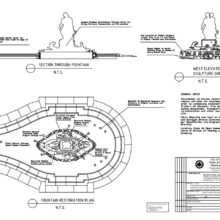 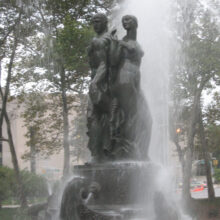 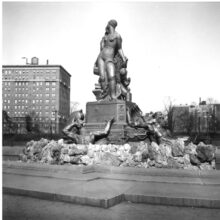