The Bardstown Confederate Memorial was erected at the turn of the 20th century to commemorate the deaths of the sixty-seven Confederate Soldiers buried in the Bardstown Cemetery in Bardstown, Kentucky. The figure is constructed of zinc, which was a popular material for sculpture at that time as it was less costly and easier to cast than bronze.

The monument was severely damaged when a tree fell on it during a storm in May 2000, shattering the figure into dozens of fragments. More than 95% of the scattered pieces were carefully salvaged by the town. In addition to the breaks there were structural cracks around areas of impact and deformation. Other superficial cracks may have resulted from older stresses introduced during fabrication. Significant losses were sustained as well. All exposed surfaces appeared a light bluish-gray, the typical color of weathered zinc that is due to the formation of zinc oxide and other corrosion products.

All salvaged pieces were crated and shipped to our conservation studio where, their orientation carefully documented. Most of the fragments were deformed and required some reshaping. Elements that were lost or extremely deformed were recast. All fragments were re-attached with a zinc/tin solder. Some pieces required stainless steel threaded rods for additional support. In addition, an internal stainless steel structure was erected inside the statue to support the structure, which had been undermined by the damage.

The surface of the figure was sanded and then washed with an anionic detergent. Repaired areas were repatinated to blend with the historic appearance. The limestone base was cleaned of old mortar and inspected to reveal cracked joints. Joints were raked out and capped and those visible on the stones after installation of the monument were re-pointed. 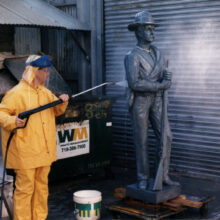 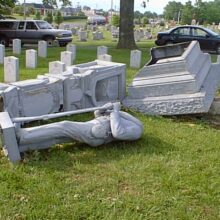 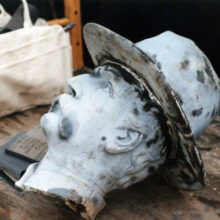 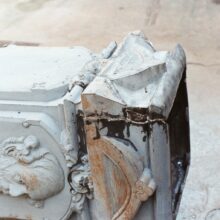 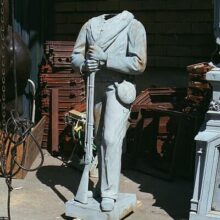