Located in Fort Bliss in El Paso Texas, the mural was painted on the wall of a hospital library for recovering soldiers during World War II. The artist, Baron Rudolph Carl von Ripper, was an extraordinary and unique painter, soldier and was called by Andre’ Malraux a “last Romantic”. Born into an aristocratic Austro-Hungarian family, he lived a life of adventure and romance. He smuggled arms in China, fought in the French Foreign Legion, was arrested and tortured by the NAZIs for speaking out against them in Austria before escaping prison, joining the Spanish Loyalist Air Force, than fighting with the US Army and the OSS in World War II. Wounded in battle more than 20 times, he continued to create scathing illustrations, paintings and etching castigating the evil of the Nazi enemy. His illustration for the cover of Time Magazine depicting Hitler as a demonic manipulator of medieval torture devises remains their largest selling issue. His exploits in the war and afterwards are ths subject of numerous articles and books in English and German.

While recouperating at the US Army hospital in Fort Bliss, Texas Von Ripper painted this mural celebrating the strengths and diversity of America. It was painted directly on the existing exterior wall without the appropriate preparation necessary for long term perservation of the work. Later, the mural was encapsulated in a false wall buit over it. When it was revealed as part of an initial Army plan to decommision and demolish the building the mural was found still intact but in poor condition. We were engaged to document the mural, assess its condition and develop plans to remove and conserve the work prior to demolition of the building. Working with specialists in paint conservation, rigging and photography, we thoroughly documented the existing conditions, studied and tested the stability of the paint layer, building and site, and developed plans to stabilize, face, remove and re-back the mural. The complex project was made particularly difficult by the idiosycratic painting method. After consideration the owners now intend to preserve this unique work of art and restore it. 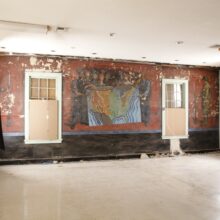 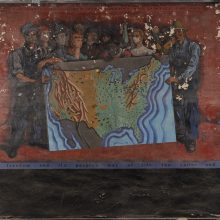 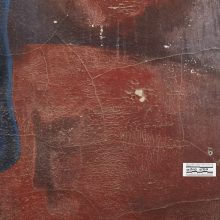 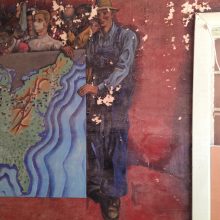