The Bay Pines Soldiers Memorial is a grand Art Deco monument at the center of the National Cemetery in Bay Pines, Florida. Consisting of a five sided tower, the monument is carved from beautifully figured Etowah Fleuri marble from Georgia. The monument was severely damaged after being struck by lightning in 2009. An entire face of the tower was blown off, other stones were destabilized, and, not surprisingly, many stones were irreversibly damaged.

The Veterans Administration contracted us to restore the monument to its original condition, repair all damage and install a lightening protection system. A careful survey of the monument was completed and all losses were mapped on CAD drawings. Shop drawings were prepared for new stone units to replace the lost ones. Conservators traveled to the Georgia Marble quarry to select one of the rare stone blocks that still existed with both coloring and veining similar to the seventy-year-old stock used in the monument. Units were then carved to match the damaged ones. When they were ready to ship, we mobilized on site and restored the monument. Failed caulking was cut out and dislocated stones were carefully removed and salvaged. The hollow brick core was restored and a lightning protection system fed through it from the uppermost stone to the monument base. Damaged stones were repaired with dutchman using stock from the original stones that were to be replaced. The new stones were then installed, and the entire monument was re-pointed and cleaned. Lead t-cap strips were installed on the uppermost joints to seal the core. 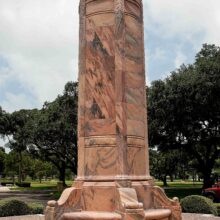 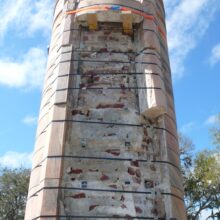 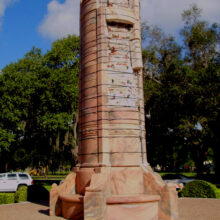 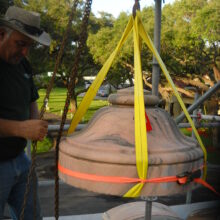