In the spring of 2018, the US Army contracted EverGreene to treat and repair seven headstones,  two monuments, and the original cemetery gate at the Fort Douglas Cemetery in Salt Lake City, Utah. EverGreene’s conservators assessed and performed conservation treatments on the objects and in the process, discovered that the Bear River Monument was in poor condition and in danger of collapsing.

During closer inspection, we observed that the base stones were loose and that the monument was not adequately supported by the internal structure which was constructed of loose rubble which had deteriorated over time. In addition, the monument was suffering from inherent flaw as the base stones did not have sufficient overlap which had allowed water to enter the interior, causing freeze thaw damage to the support structure and resulted in settling and shifting over the years. Once these conditions were revealed, work was stopped immediately, and the decision to deconstruct the monument was made by the Army.

EverGreene worked with an engineer to document, measure, and make drawings of the current configuration of the monument. It was then carefully disassembled, crated, and transported to an indoor storage facility where it could be safely protected from the elements and await further treatment and reerection. 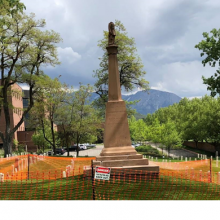 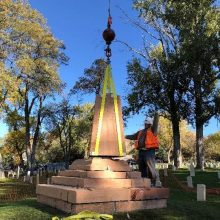 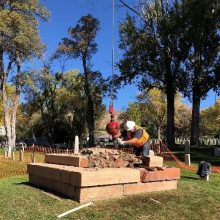 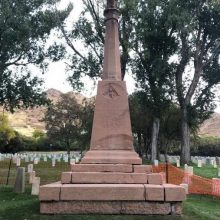 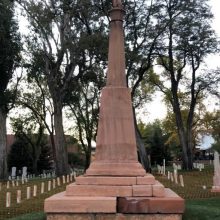