In April 1985, twelve goddesses were airlifted to the top of 580 California Street in San Francisco, California. Acclaimed architects Philip Johnson and John Burgee had commissioned sculptor Muriel Castanis to create statues as a “whimsical flourish” for their post-modern building. Castanis answered with twelve fiberglass figures, whose draped hollow forms were a contemporary exploration of classical Greek and Roman sculpture. In 2014, the building owner began the testing phase for repair and maintenance of the “Corporate Goddesses.”

After extensive review we were engaged by Jones Lang LaSalle Americas, Inc. To treat the first of the figures. This treatment would allow the conservator to evaluate repairs prior to implementing them on all of the sculptures at a later date. The figures had been previously assessed in 2011, and site access assessed in 2012.

We built on this knowledge, and conducted its own assessment and treatment of the selected figure. The figure was cleaned with detergents, biocides, and denatured alcohol to remove dirt, debris, and biological growth. Deteriorated paint was removed and cracks, losses, and impact sites were repaired with Paraloid B-72 and glass fiber bulked resins. Caulk was removed from the base of the figure and pedestal. Corrosion was removed from the aluminum-clad pedestal, and the metal prepared for repainting. Embedded iron was removed from the leg of a second figure, and the material replaced with fiberglass patching material. All of the treated materials were repainted with a color-matched, industrial paint system.

A plan was then developed to treat the remaining works based on the findings. 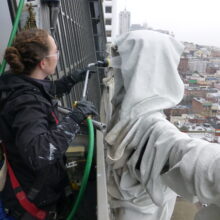 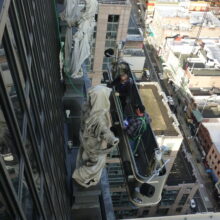 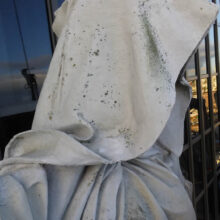 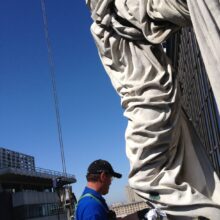 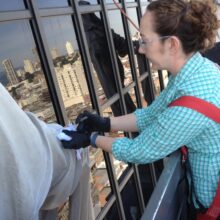 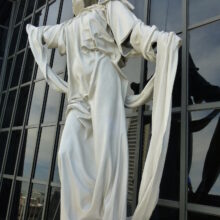 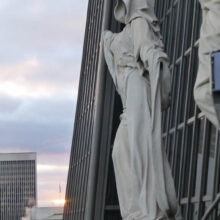 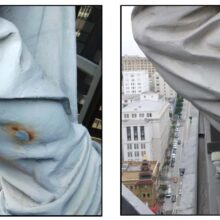 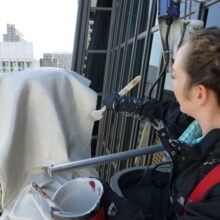 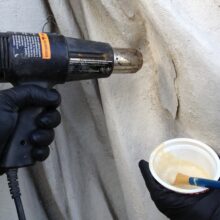