The encaustic tile ceiling within the Bethesda Terrace Arcade in New York’s Central Park dates to the mid-1860s and is the only known example of a Minton tile suspended ceiling. Minton encaustic tiles are created by inlaying colored clays into the body of a tile rather than through the application of glazes. When the Bethesda Terrace was restored in the early 1980s, it was discovered that the iron suspension structure that held the ceiling tiles suffered from severe corrosion due to water and salt infiltration from the roadway above. The ceiling’s forty-nine panels, each comprised of more than 350 Moorish-patterned tiles were removed and put into storage while a preservation treatment was researched and funding secured for their restoration.

We worked with The Central Park Conservancy to develop a restoration plan for the tile ceiling, to test methods to preserve the tiles which had continued to deteriorate during storage, and to restore two panels as prototypes. One goal of the restoration effort was to retain as many of the original tiles as possible. A stainless steel backing system was engineered that keyed each tile to the support. A complex method was developed to hold the tiles in their panel forms while the failed backings were stripped off and the new system installed. After the panels were re-backed, the faces were treated. Tiles that were in relatively good condition were washed to remove surface soiling and cleaned of excess mortar, grout, and iron staining. Losses were filled with Jahn restoration mortar, hand-painted to restore the original tile design, then sealed with a fixative. After seven years of testing, the tile repairs have proven successful and the Central Park Conservancy is proceeding with the restoration of the remaining tiles. 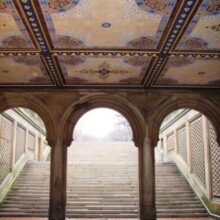 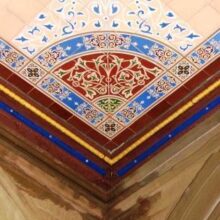 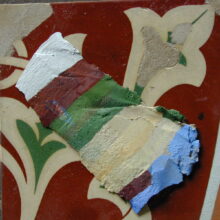 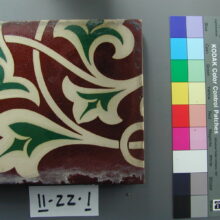