Chinese scepters (or ruyi) have had varied uses throughout history, but were often symbols of political power and used as ceremonial or ritual objects. This example has a curved wooden handle in the traditional S-shape with Chinese characters inlaid in wire. There are three wooden mounts into each of which is set a plaque, thought to be jade, carved with floral designs. The smaller of these plaques had become detached from its mount and the white material on the mount had become yellowed and degraded and there were small areas of loss on the lip of the wooden mount.

We removed the deteriorated backing material and replaced it with mulberry paper. The jade plaque was readhered in place using a conservation adhesive, and the losses in the wooden mount were filled with a bulked conservation filler and then inpainted to match the surrounding material. 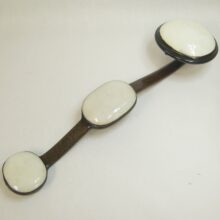 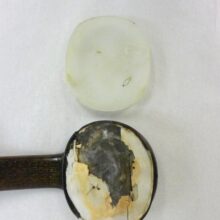 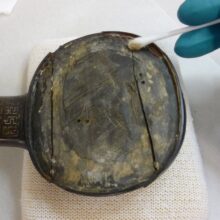 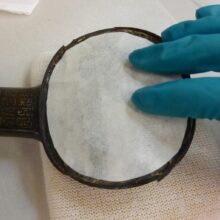 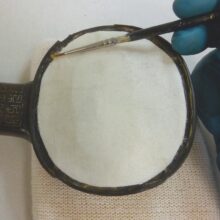