Historic Annapolis, home of the Maryland State Capital and the US Naval Academy, has only one memorial fountain. Sited on Church Circle, the Reverend William Scott Southgate Memorial Fountain was dedicated in 1901. The Indiana limestone structure features an Anglican cross with Gothic tracery atop a plinth with lion’s heads that feed the granite basin below. Its elegance and restrained scale add to the intimacy and historic feel of the traffic filled roundabout.

Although in generally sound condition, the fountain had deteriorated and weathering had caused a significant loss of sculptural detailing. The iron cramps holding the copings together had corroded and expanded fracturing the basin at these locations and causing it to no longer hold water. Additionally, it was found that the narrow stone cross was no longer secured to its base and could easily be blown over.

We were selected by the city to complete an assessment and treatment of the fountain according to Maryland Historical Society standards. A thorough list of deficiencies was developed working with the city to ensure a maximum benefit from their limited funds. All coatings were removed, the iron cramps were replaced with stainless steel and all stone surfaces were carefully cleaned. The cross was hoisted and stabilized according to an engineer’s plans. The basin was then made waterproof and is now once again functioning as intended. 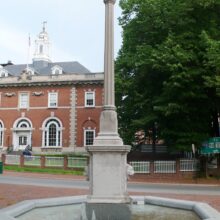 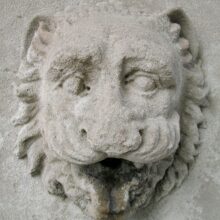 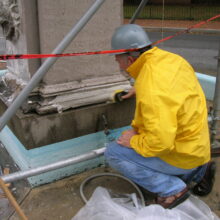 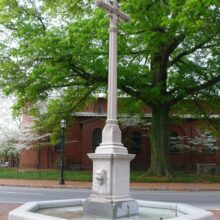 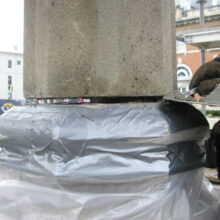