In the 1932, Winold Reiss designed a series of Art Deco mosaics and cementitious plaster industrial murals depicting manufacturing in Cincinnati, Ohio. They were originally installed in the train concourse of Cincinnati Union Terminal, which was demolished in 1974.

EverGreene restored fourteen of these murals for their relocation to the Cincinnati/Northern Kentucky International Airport for permanent display. Our scope of work consisted of a condition survey as well as the documentation of cracks, voids, grout, loss and missing tesserae, and integral color stucco. We performed cleaning tests, consolidated voids in the mortar bed, surface cleaned grout and tiles, reattached missing tesserae, and re-grouted as well. 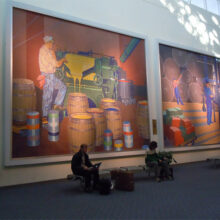