In preparation for the millennium, New York City restored City Hall Park before its historic City Hall in lower Manhattan. Occupied since the 17th century, the site has seen many significant acts in New York’s and the nation’s history.

The fountain was dismantled and removed to the Bronx to make way for a fountain by Thomas Hastings and Frederick MacMonnies in the early 1920’s, which was also later relocated to an outer borough. During and after the move of the Mould fountain, all of its many decorative lamps, structures and carvings were lost. All that remained were the massive granite retaining walls and copings covered with dozens of layers of paint and graffiti. Fortunately, the Municipal Archives retained most of Mould’s original ink and watercolor design drawings for these lost elements.

We researched the remaining structures and long lost elements, developed plans and contract documents to restore and re-create them, and oversaw the work. The remaining stones were salvaged, cleaned of all paint and graffiti, and restored with dutchman repairs. New multi-colored granite elements were carved and terra cotta Minton tiles were created to match the original designs. Gilded bronze gas lamps and finials were cast and made operable within beveled glass lanterns. New water features and sprayers were created to replicate the original display. The entire complex assembly was successfully completed and has become one of the proud features of the park as a symbol of a restored city. 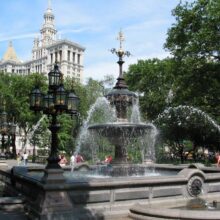 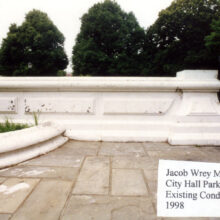 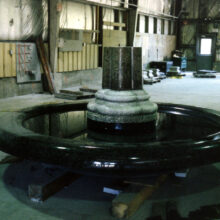 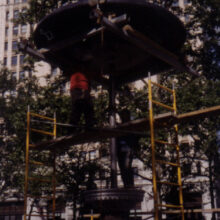 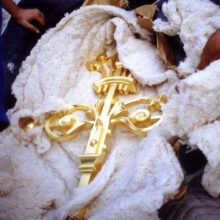