We conserved five Civil War cannons (one Howitzer, two Dalhgrens and two Napoleons) from the historic Carlisle Army Barracks. Each had been on display at the barracks and all but the Dalhgrens were kept outdoors. Treatment occurred as part of their transport to the Army Heritage & Education Center.

All cannons were carefully removed from their mountings without damaging the artifacts. This required chipping out concrete casings and hoisting the artifacts from their various locations at the barracks. Each was wrapped, hoisted, and cribbed before being transported to our studios. Soiling, paint remnants, and surface corrosion were removed by solvent gels, careful hand cleaning, and low pressure waterjetting. Extreme care was taken to protect historic markings and signs of use including spikes. All inscriptions were transcribed and documented during the work. Two of the cannons had been plugged with cement which was carefully removed by core drilling and hand chipping. Cannon balls long hidden within the barrels were found and conserved during the treatment. All debris was removed from the barrel interiors which were then waterjetted to remove soiling and corrosion.

The Dalhgren guns were re-polished and coated with an appropriate lacquer. The patina on the other cannons was chemically adjusted to remove streaking and mottling and each was protected using a hot-applied wax coating. The treated artifacts were then wrapped, crated, and shipped to the AHEC for display or storage. 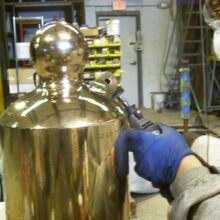 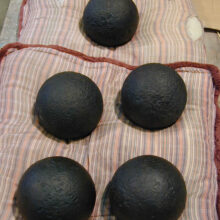 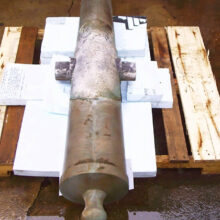