Canton, Massachusetts, is the proud home of one of the J. W. Fiske figures of the Civil War Infantryman Monument that were installed in zinc and bronze versions throughout the North. The zinc monument with a faux bronze finish, was installed atop a cast iron fountain base in front of City Hall in 1890, where it stood until it was heavily vandalized and damaged in the 1970’s. A well meaning partial restoration at that time allowed for the damaged figure to be displayed within City Hall but was not thorough enough to allow its return to the original site.

We were awarded the contract to perform this more comprehensive restoration. Having successfully completed a restoration of the same figure for the Town of Oak Bluff, we were selected as the most qualified firm based on past project experience. Work entailed removal of the figure to our studio, removal of all paint and reversal of previous repairs, re-casting of missing elements in zinc, forming new sheet zinc replacements for other losses, re-soldering the entire figure, and installation of a new stainless steel armature within the figure. After completion of the repairs, the work received an artistic faux patina with metal flake paint to closely resemble bronze as per the original design. It was returned to the site and installed atop the base where it stands again following a 40 year hiatus. 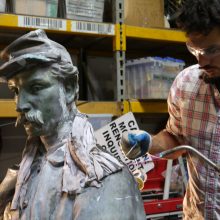 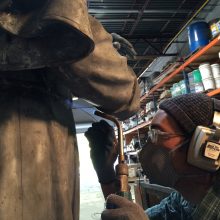 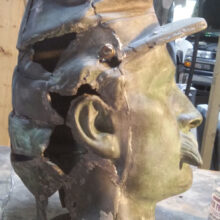 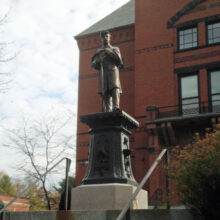 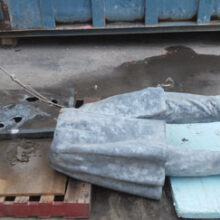 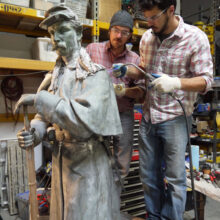 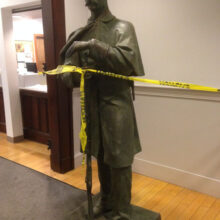