Columbia University’s Milbank Chapel is an architecturally significant building designed by William Potter in 1897, with an intact, High Victorian style interior. When the university decided to do an overall renewal so the space could be used as a lecture hall, EverGreene was hired to conserve much of the historically important interior decoration including plaster, stenciling, decorative painting, and a mural. This decoration was influenced by the British Arts-and-Crafts Movement, and included rare surviving wall stenciling attributed to the Tiffany Glass & Decorating Company (1892-1902). The unsigned mural on the stage resembled tapestries of William Morris.

EverGreene restoration specialists first repaired and stabilized the water-damaged plaster substrate. Crumbling plaster was consolidated, cracks and voids were repaired, and loose elements were secured by mechanical means. Following approval of a sample, we touched up and replicated the stenciling in areas that had suffered water damage or had plaster repair. Acrylic paints and glazes were specially mixed to match the colors and sheen of stenciling in each area of the walls. After the coffered tracery ceiling and cornices were repaired by artisans from EverGreene’s plaster studio, we painted and glazed the ceiling to match the original colors, conserved and touched-up the existing gilding in the tracery, and wood-grained the Capitals to match the historic finish.

The mural restoration objective was conservation with minimal intervention. After testing, our conservationists carefully removed dust and grime: dry cleaning the surface with brushes and vulcanized rubber sponges, and aqueous spot cleaning. They removed nails, staples and pushpins, trimmed disturbed canvas weave and placed it into its original position, filled holes with a synthetic emulsion, infilled areas of paint loss with reversible restoration paints over an isolating layer, and stabilized areas of flaking paint with a thin layer of a synthetic adhesive which produced no distinguishable difference in sheen. EverGreene craftsmen also cleaned and re-grouted limestone Gothic tracery around the stained-glass windows. Flaking and crumbling stone was consolidated with adhesives. And EverGreene sculptor Penko Platikonov carved a replacement stone Dutchman element. 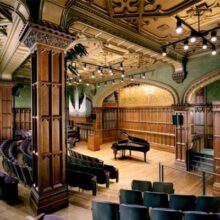 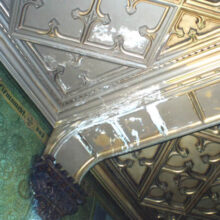