The Confederate Monument on the grounds of the Rappahannock County Courthouse was erected by in 1900 as a memorial to the Civil War dead. The monument consists of a white marble obelisk embellished with bas-reliefs with a square sandstone pedestal and plinth which sits atop a raised earthen berm.

Years of exposure caused severe weathering of the sandstone and the accumulation of atmospheric soiling. The humid environment encouraged the growth of pervasive moss, lichen, and other biological matter and soiling which embedded itself in the marble. Moisture infiltration and subsequent freeze/thaw caused numerous cracks in the marble and contributed to the failure of the mortar joints throughout the monument.

Following our initial condition assessment in 2005, we were contracted to conserve the monument in 2007. All stone was cleaned with a detergent and biocide to eliminate soiling and biological growth. Tenacious stains were treated locally with stain-specific poultices. Losses to the sandstone base were rebuilt with color-matched repair mortar and tooled to match the existing stone. Cracks were filled by grout injection and all joints were re-pointed. Finally, the entire monument was treated with a water repellent designed to reduce water absorption and the accumulation of soiling in the future. 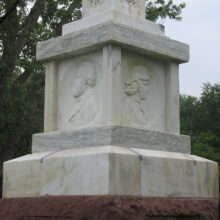 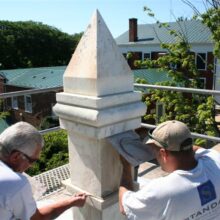 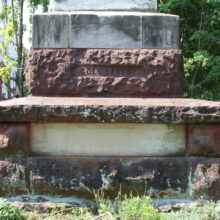 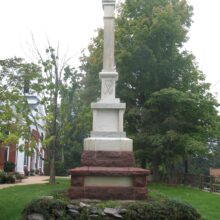 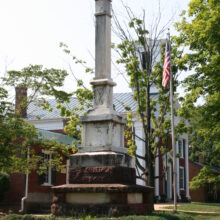 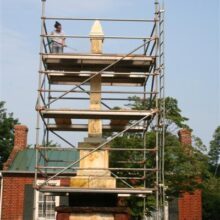 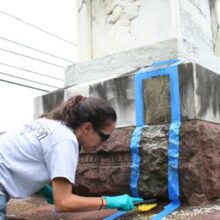 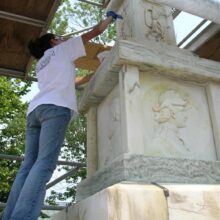