The Historic Congressional Cemetery was established in 1807 in the south- east quadrant of Washington, D. C. To serve as the final resting place for hundreds of early Washington residents. The cemetery vaults were constructed to provide temporary layover spots for officials and foreign dignitaries who died while doing business in Washington. Counted amongst these transitory residents were Presidents John Quincy Adams, William Henry Harrison, and the beloved first lady, Dolly Madison.

Five historic vaults were selected for immediate conservation treatments, along with a section of the brick perimeter wall, because of their particularly urgent structural concerns. We were contracted to perform a condition assessment, which revealed that most of the vaults suffered from failed or missing mortar joints, missing or displaced bricks, significant biological and plant growth on exterior and interior surfaces, exfoliating facades and other missing or damaged stone elements including urns and stone carvings. In addition, there were a number of corroded and structurally unstable iron gates and doors, as well as damaged vault roofs.

The brick wall that runs along E Street was targeted for conservation work, with attention directed towards the major sections of wall that were already collapsing and bowing as a result of underlying root systems from nearby trees. The vaults were cleaned, areas of stone were consolidated, the brick was repointed and rebuilt where needed, the iron doors were rebuilt and repainted, and sod was installed over the vaults according to the original design. The brick perimeter wall was partially rebuilt and underpinned to help stabilize it. 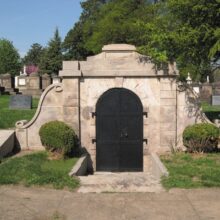 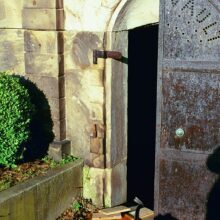 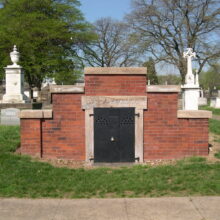 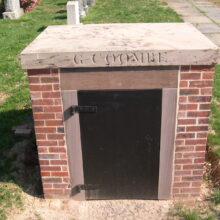 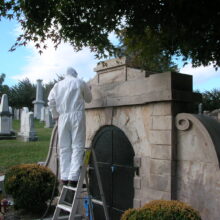