The cast stone wall panels were created for Yale University in 1963 by the sculptor Constantine Nivola as part of a series of sand molded sculptures designed for Morse College on Yale’s Campus. In 2000, we were hired to remove two badly deteriorated two-ton cement panels from the concrete parapet on which they were mounted to allow for their treatment.

The panels were removed using an experienced art rigger under the supervision of our conservator. Once removed from the wall the panels were crated and secured onto an air-ride flatbed truck and transported to our studio in Maryland. Upon inspection, the panels revealed various signs of deterioration, including cracking and spalling, deteriorated rebar and anchoring straps, advanced levels of carbonation, and biological growth. Some of the larger cracks had been inappropriately patched in an earlier repair.

The panels were cleaned with an anti-microbial solution to remove biological growth, and with the JOS Micro-abrasive system to eliminate carbonate deposits. Cracks were cleaned thoroughly with compressed air and repaired, first using a small-amount of resin to “spot-weld” pieces together and then filled with Jahn M-30 injection grout. Larger cracks were topped with a custom color-matched Jahn patching mortar and finer hairline cracks were filled with a pigmented dispersed hydrated lime (DHL). Once fills and patches were fully cured, a water repellant was applied to the panels to help prevent water infiltration and freeze-thaw damage. 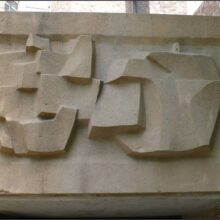 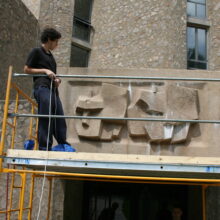 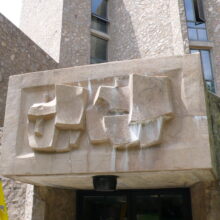 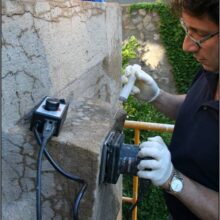