Coral Gables, “The City Beautiful,” was planned and developed during Miami’s land boom in the 1920’s by George Merrick. The first land development to advertise and sell nationally, it became an icon of the good life that Florida promised. The city was built on old orchards along strict design guidelines that established its unique character of a imagined, romantic old Spanish heritage, a character it retains today. The grand boulevards, winding drives, traffic circles, and intersections of major thoroughfares were enlivened by a variety of architectural features, including monumental entrance gates, fountains, pergolas, and decorative lampposts, all created of the local Key Stone, cast stone and cement parges to resemble weathered ancient construction.

Although many of these design features survive, they are currently found in varying states of disrepair and deterioration. The lush, humid environment of South Florida has led to extensive biological colonization and vegetative overgrowth. Tree trunks, root systems, and limbs have forced walls to lean, become displaced, or caused structural cracks. Original finishes, such as pigmented stuccos and parges, have largely deteriorated; well-intentioned repairs and replacement materials are often not visually sympathetic or materially compatible. Major incidents, such as car crashes, have led to major structural damage in select locations.

We were engaged by the client to perform a conservation condition assessment of seven entrance features. We assessed each element individually; from here, conservators developed a glossary of conditions and treatment recommendations that were general to the collection of architectural elements on the whole. We collaborated with the Architect throughout the design process to answer questions as they arose, including the specifics of treatment methodologies and the compatibility of proposed products and materials. 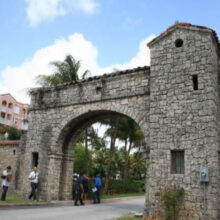 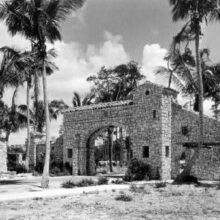 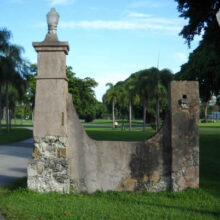 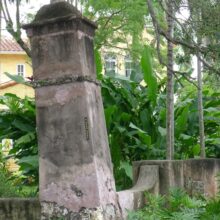 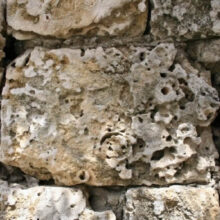 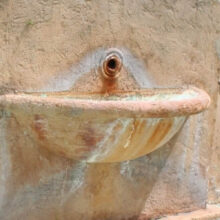