Vizcaya Museum and Gardens, a National Historic Landmark in Miami, Florida, integrates extensive decorative architectural sculpture made especially for the site amongst its collection of antiquities. Carved of the local coral stone, a highly figured fossiliferous limestone, the sculptures enliven the buildings and gardens with a wonderful array of classically influenced figures, urns, and grotesques. Six Herms, allegorical busts integrated into tapering columns, surround the entrance oval that leads to the house.

In 2006, one of the Herms was damaged when it was hit by a delivery truck. The fragile carved stone toppled into the adjacent plantings, breaking into three main pieces and numerous small fragments. Some of the smaller carvings on the headdress were broken beyond repair. The museum salvaged what could be saved and preserved the rest for restoration.

We were contracted to restore the damaged work. Rubber molds were made from matching elements on a similar Herm and replicas were created to replace irreparably damaged elements. Structural scaffolding was installed and the fragments were carefully hoisted, cleaned, and re-erected on their base. After reassembly was complete, the re-created elements were mounted and all losses were filled with a custom patching mortar. The highly figured graining of the weathered stone was carefully modeled into repair areas to build up areas of loss. Previous damages were undetectable upon completion of work. 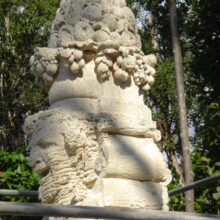 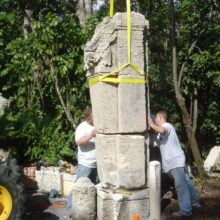 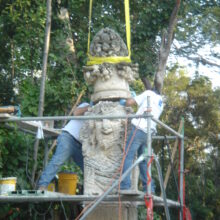 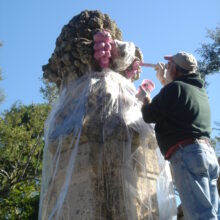 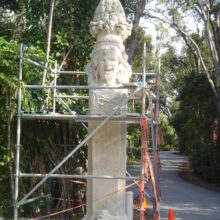