The Cornelius and Baker firm of Philadelphia produced extravagantly decorated gas lighting fixtures in the mid 19th Century. Technical innovations in metal coloring that they developed were used to finish sculptural elements with vivid copper, brass or silver tones. Cornelius and Baker fixtures enlivened the Senate Corridor of the United States Capitol from 1857 until they were replaced with electrical fixtures around the end of the 19th century. The original fixtures were thought to be lost until a single Armorial Gasolier was located in storage and brought into the Senate collection.

We were engaged by the Senate Curator’s office to assess the condition of the fixture and develop a treatment plan for its restoration. If possible, a further goal was to determine whether this fixture was one of the Senate originals. Conservators documented the chandelier and all remaining fragments, tested them for remnant finishes, researched the construction methods and cataloged all losses to the artifact. The results of the study were developed and represented graphically on base CAD drawings and in an assessment matrix. A series of treatment methods was prepared and contractors capable of providing the work were located.

While not conclusive, the study suggested that the fixture was a Senate original that had been partially electrified and then abandoned. 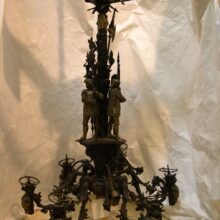 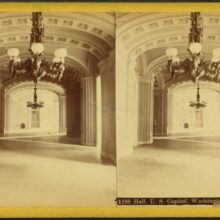 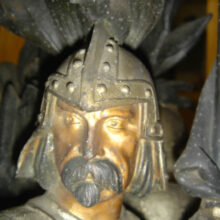 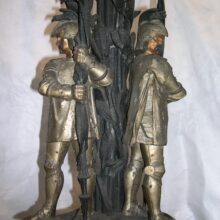