The Soldiers & Sailors Memorial, the only monument in the quaint city of Stillwater on the Minnesota side of the Saint Croix River, was installed in 1917. It memorializes the many residents of Washington County who fought for the Union in the Civil War. It is sited at the 1867 Courthouse.

The monument had suffered from deterioration typical of monuments sited in the outdoor environment. The bronze had developed green and black disfiguring streaks as the surfaces corroded. Inappropriate iron brackets were installed to replace the original central mounting bolt, which were lost at some point in the past. The granite was soiled and missing its original lead caulking.

We were contracted to conserve the monument in 2007. The iron brackets and gun straps were removed and the bronze statue was hoisted off the base in order to restore the mountings. A time capsule dating to the statue’s original installation was found under the statue and surrendered to the owner. The statue was remounted and all damages to the stone resulting from the previous inappropriate work were restored. All surfaces were cleaned, the stone was re-caulked, and the bronze was repatinated. The plaques and statue were then coated with exterior grade lacquer. A maintenance plan for the monument was included in the treatment report to help facilitate future work. 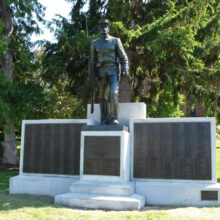 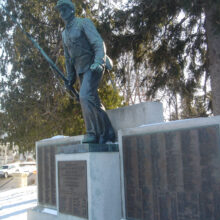 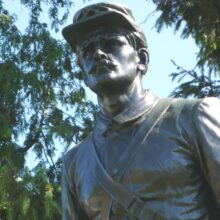 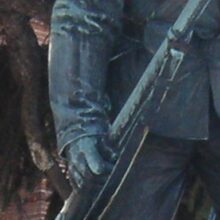