The Manhattan Bridge was the third bridge to be built connecting the boroughs of Manhattan and Brooklyn. Completed in 1909 to a design by Carrére and Hastings, it displayed stylistic and technological differences from its two predecessors, the Brooklyn and Williamsburg bridges. In 1913, acclaimed American sculptor Daniel Chester French was commissioned to create allegorical sculptures representing the two boroughs to herald the entrance to the bridge. “Manhattan” and “Brooklyn” were carved from Barre Granite and installed in 1916. They remained there until the bridge roadway was widened in 1964, resulting in their relocation to the Brooklyn Museum of Art.

Our conservators treated “Brooklyn” and “Manhattan” among near 30 other early 20th-century statues and the pediment group that adorn the Brooklyn Museum. The façade figures were sculpted by several renowned American sculptors, including Daniel Chester French, Louis Saint-Gaudens and Janet Scudder. French established the sculptural program for the McKim, Mead and White building, which depicts the contributions of world cultures on the building’s right and Classical cultures on the left, both combined in the central pediment.

Each figure was disassembled into its component stones. Atmospheric and biological soiling were removed using gentle a gentle detergent and biocide. Dark carbon crusts were removed through a combination of chemical and microabrasive cleaning. Loose fragments were stabilized with a conservation resin and cracks injected with dispersed hydrated lime (DHL). Following the completion of the conservation treatment, the figures were each installed in their new location, flanking the entrance to the museum.

The conservation effort was part of the initial phase of the Brooklyn Museum Master Plan that was fulfilled between 2001-2003. The plan included the creation of a new entrance as well as the work on the facade. The entire museum enjoyed a grand re-opening to display its
dramatically redesigned and renovated front entrance and public plaza in the spring of 2004. The treatment of the statuary was an integral part of the museum’s continued development. 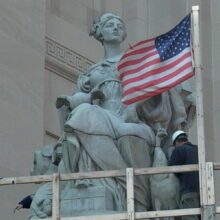 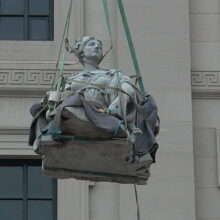 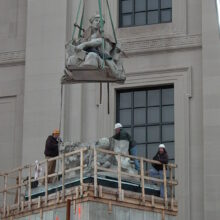 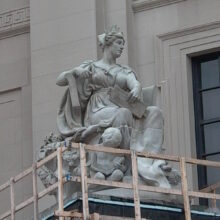