As part of a major restoration of the plaza at 345 Park Avenue in New York City, Rudin Management called on us to treat Dinoceras, a unique bronze sculpture sited there.  The work had been created from separate castings roughly welded together in an improvisational style, commonly done during the 1960-70’s.  It had been installed on a cast concrete plinth on the building’s plaza but needed to be removed to allow for the plaza to be waterproofed.  The owners wished to conserve the bronze while it was off-site.

We oversaw the complex rigging and transport necessary to free the sculpture from its base and remove it to a warehouse storage facility. Conservators cleaned the surfaces of decades of loose corrosion and soiling, including mounds of debris that had been stuck into its many openings. During the work, the fragile nature of the armature supporting the bronze castings was discovered when several cracks opened in the weld seams. We carefully repaired the damage by reshaping the sculpture to its original footprint and repairing the skin and armature through TIG welding.  All repairs were repatinated and the entire sculpture was coated with a hot-applied custom formulated wax.

After work was completed on the plaza, the restored sculpture was stabilized and transported back to the site. New mounting holes were drilled according to the template that had been created prior to the removals and the sculpture was securely reset following engineered plans. 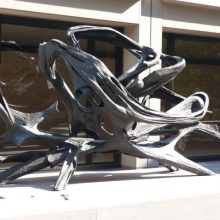 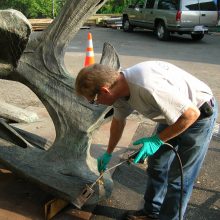 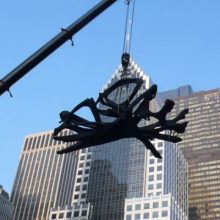 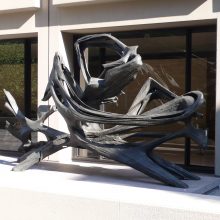 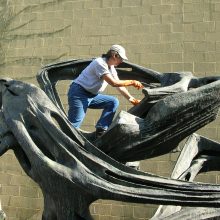