The original ceiling mural, a tribute to the Machine Age, had been severely damaged when the Empire State Building underwent modernization in the early 1960s and a fluorescent light acrylic ceiling was installed. To recreate the magnificent work, we began by researching historical photographs and tracing extant remnants of the ceiling murals. All mural painting work was executed in EverGreene’s New York studio on fire retardant canvas.

The 26-step process used over 115,000 sheets of aluminum leaf. The recreated murals were installed on a new ceiling, inches below the original, thereby conserving the extant portions of the original work. In addition to the mural, we created cast and etched glass light panels in the lobby.

Notably, the space remained occupied during installation, and the construction phase was completed after-hours to minimize disruption. To complement the landmarked lobby’s marble-clad walls and a fully-revised lighting system, EverGreene artisans designed and created faux-marble-printed panels to cover the partition walls during construction.

Periodically since this cleaning EverGreene return to the site to perform treatments and maintenance for the ceiling to stabilize small areas with flaking metal leaf finish, fill losses, and in-paint as appropriate to minimize the appearance of the cracks from floor level. 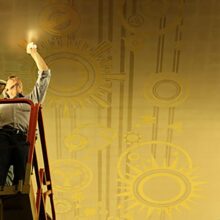 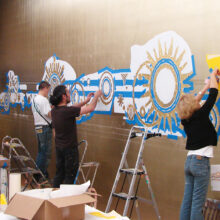 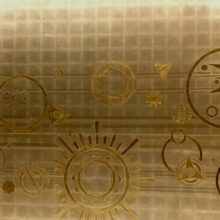 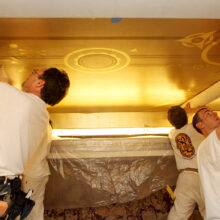 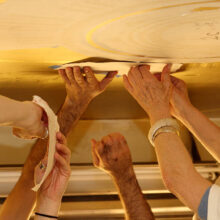 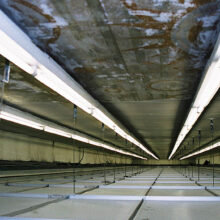 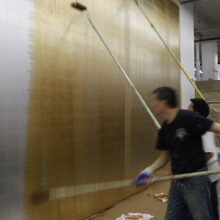 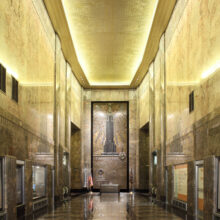 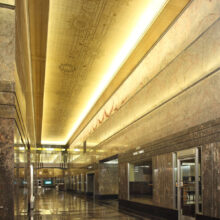 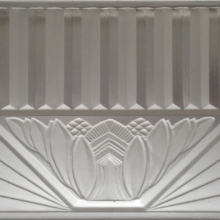