Father Marquette (1637-1675), a French missionary, became well-known for his work in the Great Lakes region. His abilities as a linguist helped him as he explored with the assistance of native peoples, becoming among the first Europeans to see and map the northern portion of the Mississippi River, and the founder of Michigan’s first European settlement. Numerous statues and monuments have been erected to him throughout the area, including this one at the gateway to Marquette Park in Gary, Indiana.

The bronze statue was in fairly good condition, but had been painted with a clear coating with an additional layer of copper paint on those areas easily accessible from the ground. It also became apparent that the sculpture had been aggressively over-cleaned using acid and abrasive materials.

We were contracted to remove the existing coating and restore an even, historically accurate patina. Care was taken to protect the Indiana limestone base during the several applications of paint stripper, pressure-washing, and mechanical cleaning while removing the failing coating. The patina was developed through repeated applications of various non-chlorinated chemicals to achieve a rich variegated appearance which closely matched the underlying original patina. A clear lacquer coating, selected for its durability and low maintenance requirements, was applied to all surfaces. Upon completion, the client was provided with a treatment report that also included a maintenance plan for the upkeep of the monument. 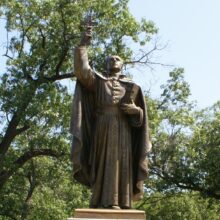 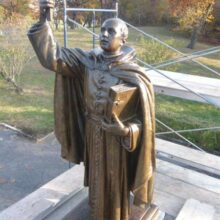 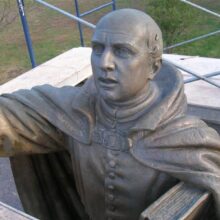 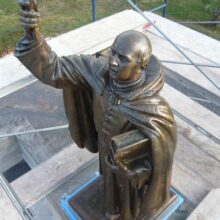 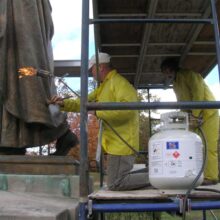