The Flagler Memorial Monument is sited on a man-made island in Biscayne Bay, between Miami Beach and Miami. Built in 1920-21 by Carl Fisher, the developer of Miami Beach, it memorializes Henry Flagler who turned his profits as founding partner of Standard Oil into developing railroads and property on the east coast of Florida, starting in Saint Augustine and ending with the construction of the Overseas Railroad to Key West. The monument consists of a 96’ tall cast concrete obelisk with four cast stone allegorical figures around the base depicting Education, Industry, Prosperity, and Pioneer. The isolated island site has left the monument vulnerable to weather exposure (wind, floods, hurricanes and the occasional lightening strike), salt damage, biological growth, coating failures, stone losses, and assaults from vandalism.

The entire monument was cleaned by a combination of low pressure water-jetting. Loose and flaking paint and previous repair parges were removed from the obelisk to expose sound original surfaces. Areas were sounded and where necessary, damaged concrete was cut back to a sound surface and to expose deteriorated rebar. The rebar was blast-cleaned to bright metal and treated with a corrosion inhibitor and a protective coating. All losses and spalls were then rebuilt using restoration mortars. Cracks were injected with a compatible grout. The entire structure was then coated with a potassium silicate paint matching the historic color.

Work on the figures was more extensive. Each had suffered damages from vandalism and corrosion of the internal reinforcing. Extensive surface erosion had deteriorated the legibility of the forms. Inexpert repairs over the monument’s 80-year life had further masked the modeling. Each was cleaned using the JOS/Quintek Microabrasive System and was then treated with a biocide. Loose fragments of the parge were then carefully chipped away to reveal the substrate. Replacements for missing and damaged arms, hands and feet were modeled and cast in restoration mortar. Each figure was then coated using similar methods and materials to the obelisk. 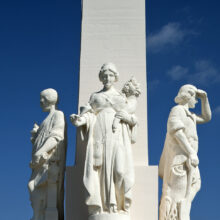 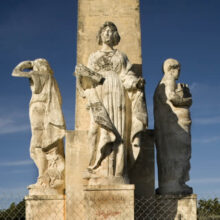 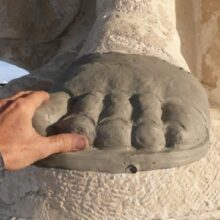 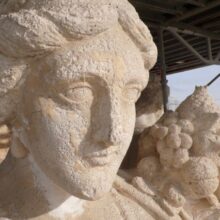 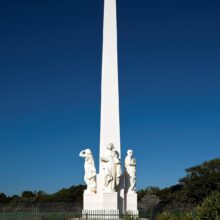 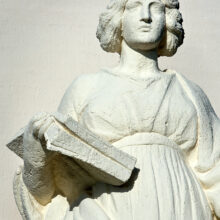 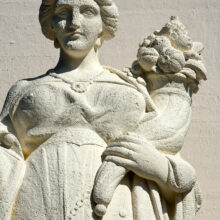