Framing the White House in the main north-south axis at 16th Street and Constitution Avenue NW in Washington, DC, are the two Haupt fountains. These fountains were funded by a gift from Ms. Enid Annenberg Haupt, editor of Seventeen Magazine. The project began in 1969 at the request of Lady Bird Johnson. They were designed by architect, Nathaniel Owings, and carved by California sculptor, Gordon Newell, from monolithic slabs of Minnesota Rainbow granite, 18 feet square and each weighing 55 tons.

The fountains had deteriorated by 2005 when we were contracted to perform materials testing, research and analysis in order to develop a restoration plan. The observations on site included general soiling, biological growth, iron staining from remaining obsolete ferrous anchors, failing mortar in the ceramic pavers, and calcium deposits on the pavers caused by long term water leaks.

In 2007, we were contracted to perform the specified treatments. Work included general cleaning, biological growth and ferrous stain removal. Corroded anchors were removed and the ceramic pavers were re-pointed. Polyethylene weep tubes were inserted into a horizontal joint at the base of the fountain to allow water from internal leaks to escape. Finally, the calcium deposits were removed from the pavers. Repairs to the piping of the fountain, carried out by others, were also necessary. 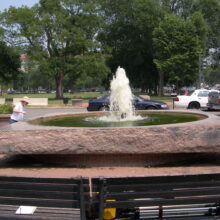 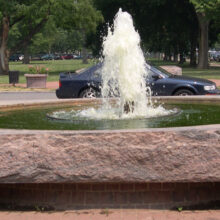 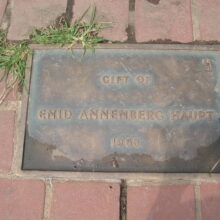 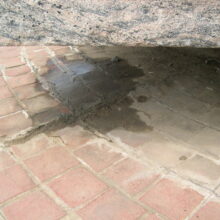