Heisser and Freedom Squares, two neighboring public spaces in Brooklyn, New York, are each anchored by a bronze World War I memorial sculpture. Heisser Square is occupied by the Doughboy Sculpture (or the Bushwick-Ridgewood Memorial), an over life-sized figure dedicated to the neighborhood boys who died in the Great War. The nearby Freedom (also “Winged Victory” or “Victory with Peace”) is dedicated to the men of the 19th Assembly District who also gave their lives. Both figures stand atop Westerly Granite bases and were dedicated in 1921.

The sculptures exhibited an appearance and condition similar to other unmaintained bronzes of the same age in an urban outdoor environment. Active corrosion of the bronze surfaces was visible by its pale green appearance, streaking, and pitting of the surfaces. The granite bases exhibited localized staining and mortar failure.

The entire monument was cleaned using a non-ionic detergent. Metallic and grease stains were treated locally. Areas of particularly tenacious soiling on the base of Freedom were carefully removed through microabrasive cleaning. Active corrosion and remnant wax were removed from the figures with bronze wire brushes and mineral spirits. The figures were spot-patinated to help reduce the contrast between the areas of light green and black corrosion. Two applications of protective wax were applied to a heated surface. A final coat of cold wax was applied and lightly buffed. Joints in the granite base were re-pointed as needed. Because the hat of the Doughboy was an obvious water catch-point, a 1/4” weep hole was drilled into this element to facilitate proper drainage. 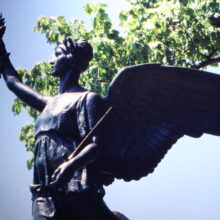 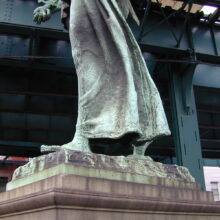 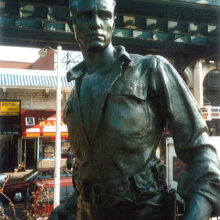 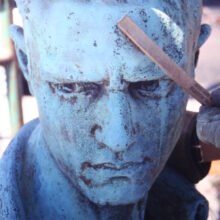