Situated in New York City’s infamous Time Square, the I. Miller Building was originally commissioned in the 1920s to house a well-established women’s shoe store chain. As an ode to the rich local history of Broadway theater, Alexander Stirling Calder designed four carved marble figures to adorn mosaic niches on the façade, each one emulating a leading actress of the time.

We were contracted to assess the conditions of the four sculpted figures and carry out subsequent conservation treatments, in addition to restoring the gold foil mosaic murals that lined the niches.

All surfaces were cleaned with misting and careful wiping with detergents and water to avoid detaching more glass from the embedded foil backs. Failed and lost tesserae were replaced with new gold foil backed glass which was custom cut to fit. These were set in custom formulated un-sanded modified grout. Cracks were injected with high lime grout and all missing grout was replaced with new color matched modified grout. Work was completed before re-installation of the conserved sculptures. 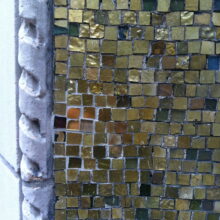 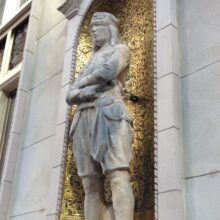 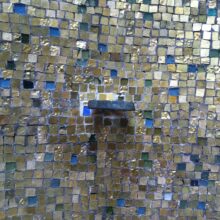 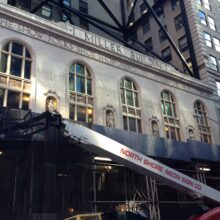 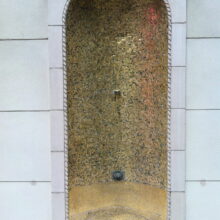