Joseph Smith Memorial Building, or previously referred to as the Hotel Utah, is retitled in honor of the founder of the Latter Day Saint movement, Joseph Smith. The hotel was designed by the Los Angeles architectural firm, Parkinson and Bergstrom, in the Renaissance Revival style and opened in 1911.

In the 1990’s, EverGreene was involved in the conversion of the Hotel Utah to the Joseph Smith Memorial Building. Our work at that time included scagliola, decorative plaster, decorative painting, and gilding. An EverGreene conservator was brought in by The Church of Jesus Christ of Latter-Day Saints to complete the plaster and finishes survey of the Joseph Smith Memorial Building (JSMB). The onsite assessment focused on the plaster and decorative finishes in the lobby, atrium, and ceiling areas of the building. An assessment report summarizing the plaster and paint condition per each architectural space was provided to the client alongside specific treatment recommendations.

EverGreene restored scagliola on the multi-story columns in the former Hotel Utah lobby. 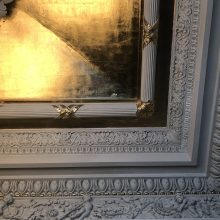 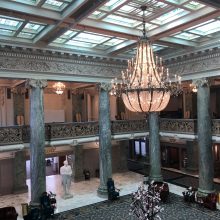 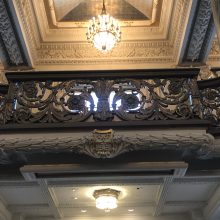 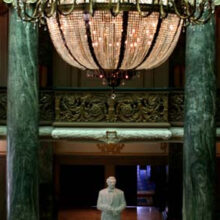 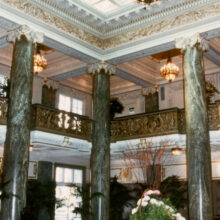