The Kansas State Capitol building, located in Topeka, Kansas, is an elegant statehouse combining Renaissance and Classical revival elements. Begun in 1866, it grew over the course of four decades. Its final achievement is a grand domed roof, constructed of hollow clay tiles set into an iron truss and brace system, which was then covered with sheet copper. The dome was completed in 1903.

After a century of exposure, the roof was showing visible tears and joint failure. A repair campaign had been carried out in 2000, which included intentionally treating the copper with patina chemicals to achieve a consistent verdigris color. However, the treatment appeared to be failing after less than 7 years. These conditions prompted concerns about the longevity of the roofing material, as well as curatorial concerns about the appearance of the dome.

We were contracted in 2007 to assess the current condition of the copper sheet roof and estimate its anticipated life-span. We also examined the methods used in the 2000 refinishing. Most of the original construction was found to be sound, but some improper detailing had led to recurring failures. Exposure-related damage was noted, including metal that had been work-hardened and torn by wind, and battered by hail. We confirmed the new patina was failing but did not feel comfortable recommending an appropriate alternate chemical treatment within the limits of current technology. We evaluated the copper thickness in-situ with an ultrasonic thickness gauge to direct repairs towards areas of weak, thin metal. Additional samples were sent to a testing lab to examine the nature of the cracks and tears observed. Recommendations were generated for minimal, targeted repairs to greatly extend the practical life of the roof. 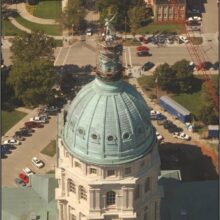 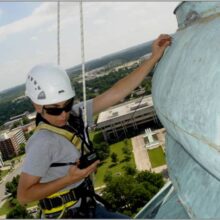 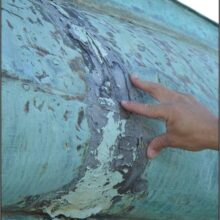 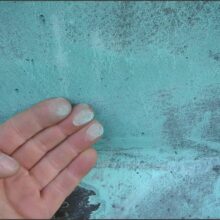