The Kansas State Capitol took 37 years to be built. Originally designed by Edward Townsend Mix and revised by John G. Haskell, construction began in 1866 and was not completed until 1903. Haskell planned for the Kansas State Capitol dome to look similar to the U.S. Capitol, and both architects were inspired by Greek and Roman classical architecture. Numerous modifications and various different decorative campaigns were carried out before a 10-year comprehensive restoration of the entire building was undertaken, which EverGreene was a part of, between 2002-2014.

EverGreene commenced the beginning of nearly 20 years’ worth of work with a pilot project in the House Chambers. Discoveries such as murals, trompe l’oeil, and lettering during this pilot project spurned the entire building restoration master plan. EverGreene was part of the design team, working in a conservation assist capacity to investigate finishes and plaster studied virtually in every space, both public and private offices. EverGreene also investigated the flat and ornamental plaster, decorative painting, and restored the scagliola columns.

In the Senate Chamber, EverGreene restored the historic cast-iron columns and pilasters.

Additionally, EverGreene has been retained for future phases of work at the Kansas State Capitol, including conservation studies and the restoration of plaster work and paint. 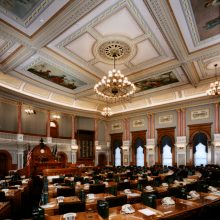 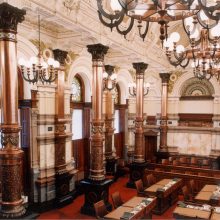 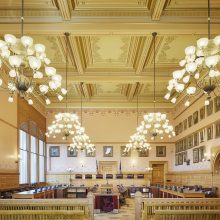 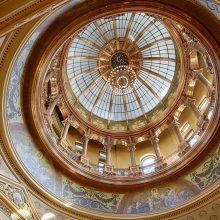 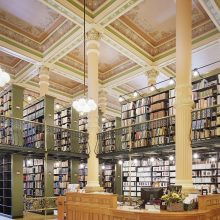