Kennedy Center For The Performing Arts

Working as part of an inter-disciplinary investigative team, we conducted an exterior condition assessment survey for the John F. Kennedy Center for the Performing Arts. The building is recognizable even at great distances by its pristine white marble façade. The stark appearance of this monolith is typical of the International style and important to Edward Durell Stone’s design intentions. When stains began to appear on the white marble the Kennedy Center staff was eager to remove these blemishes. Repeated attempts to remove discolorations, however, were unsuccessful.

We participated in the compilation of the 2015 Comprehensive Building Plan and provided an assessment of the exterior building envelope. Special attention was focused on the staining of the marble and granite pavers, although the assessment also included a survey of fountains, the roof, curtain walls and other major elements. Preliminary analysis of the stains was done with X-Ray Fluorescence (XRF), Forward Looking Infrared (FLIR) thermography and field microscopy. Stain removal tests were performed with chemical cleaners and a Nd:YAG laser.

We were able to identify a number of complex mechanisms that were contributing to the marble and granite staining. Recommendations were made for further investigation and analysis of the stains. Recommendations were also made for investigation of the Plaza level drainage system and to develop a comprehensive maintenance program for occasional patching of marble and localized cleaning that can be performed by the Center’s in-house staff. 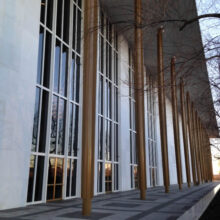 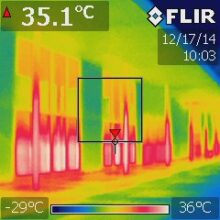 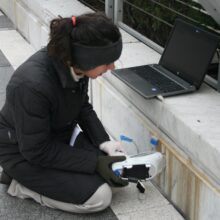 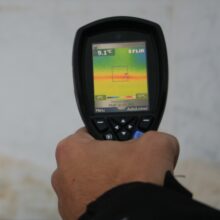