The LaGrange Terrace was built in New York City in the early 1830’s. Nine townhouse with an impressive marble colonnade lined Lafayette Street. In 1902, five of the houses were demolished and much of the facades were relocated to an estate in NJ and largely forgotten. In 2010 the Metropolitan Museum of Art rediscovered these significant fragments of New York architectural history and contacted us to restore a column for the American Wing Courtyard.

The marble of the column base, drums and massive capital was friable after spending 100 years lying forgotten in a forest. We constructed custom rigging clamps to safely transport and handle the massive and heavy stones without damaging the delicate carvings. Each element was transported to us’s studio before being installed at the museum.

Heavy incrustations of biological growth were carefully removed by biocide and hot water washes. The drums were cut down accordingly to fit under a mezzanine at the museum. Small losses were filled with injection grout and friable stone was capped with mortar. All components were prepared in the studio to facilitate installation with minimal interference with the museum’s operations. Custom scaffolding frames were engineered to accommodate the museum’s access and floor-loading requirements. The column was installed on time and on budget within the courtyard and complements the All Angels Pulpit also installed by us in 2008. 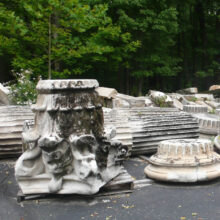 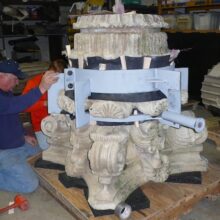 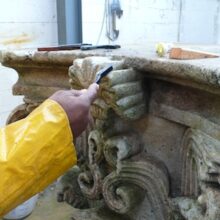 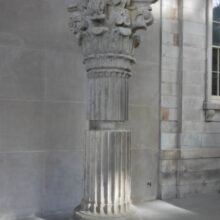 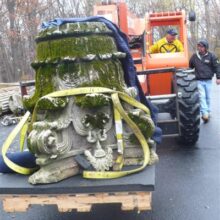