The Manhattan Sentinels are a site-specific commissioned sculpture by Beverly Pepper situated in Federal Plaza in downtown Manhattan, New York City. The piece was commissioned by the US General Services Administration’s Art in Architecture Program and was installed in its current location in 1996. The cast iron sculpture consists of four cast iron “totems” that rise up to 39 feet tall from the base.

The objectives of the assessment include the accurate capture and documentation of the orientations of each sculptural element; to evaluate the pre-removal condition and identify potential risks during the relocation process; and to provide comprehensive contextual records of the deinstallation and reinstallation process that was planned to occur during restoration of the plaza. Accurate capture and documentation of extant orientation was achieved with a drone-mounted 3D scanner. The resulting point cloud was used to create AutoCAD drawings that establish reference points to be used in re-siting the sculpture at the time of reinstallation. Evaluation of pre-removal condition was conducted on-site from ground level followed by examination of high resolution orthophotos provided by the drone.

Additionally, EverGreene supervised the removal of the sculptures from the site into their storage facility. Completion of the project is expected during reinstallation, after site work is finished. 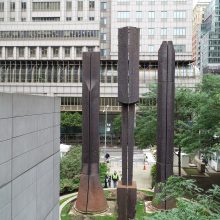 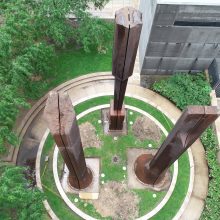 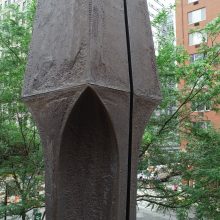