The Founders Monument is a commemorative sculpture, dedicated to the four original founders of the Daughters of the American Revolution. Sculpted by noted artist and DAR member Gertrude Vanderbilt Whitney, the monument was dedicated in April, 1929. The monument is sculpted from white Tennessee marble, accented with bronze medallions and incised dedicatory text.

The monument showed evidence of damage from environmental exposure and previous interventions. Surfaces were soiled with atmospheric deposits, plant remnants and biological growth. The statue and base showed cracking. Skyward-facing joints had opened, resulting in mortar failure and loss, while other joints had been pointed with an incompatible mortar. The medallions had been treated with an inappropriate finish of bright highlights on a dark ground. Nearby stone surfaces had been aggressively bush-hammered in an attempt to remove copper staining.

Failed and incompatible mortar were carefully cut out and repointed, and lead T-caps were installed in skyward facing joints to prevent premature weathering. Atmospheric soiling and biological growths were removed using an anionic detergent and biocide, and gently rinsed with steam and low-pressure water. Carbon and gypsum crusts that remained were removed through micro-abrasion. Cracks were filled by injecting a color-matched fill of Dispersed Hydrated Lime (DHL). The bronze medallions were stripped of existing coatings, re-patinated using cold patina chemicals to a rich, even brown and lacquered. 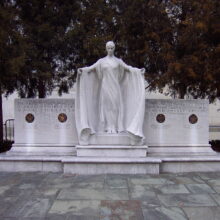 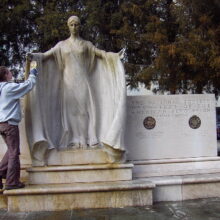 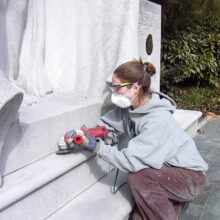 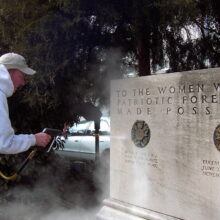 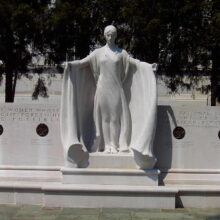