We were contracted to perform an historic materials survey of The United States Federal Penitentiary in Leavenworth, Kansas, which has been an active institution since 1897. Today USP Leavenworth is a maximum security prison housing over 1,700 men. The scope of work included a condition assessment, testing and analysis of brick and limestone masonry and pointing mortars, and analysis of historic interior plaster and painted finishes. Results of testing and recommendations were provided to the project architect to be included in the HSR produced for the Federal Bureau of Prisons.

The survey of masonry materials focused on the 35-foot tall prison yard perimeter wall that surrounds USP Leavenworth. The wall is built primarily of brick with three different types of limestone used as coping stone and foundation facing. Construction of the wall began in 1897 and was completed over two decades with “common” brick manufactured on prison grounds using prisoner labor. The wall has undergone numerous repair campaigns, some of which were ill-advised and resulted in increased deterioration of the brick. We removed brick samples from the wall and performed a series of absorption tests which included Rilem Test Method II. 4 and ASTM C67. Multiple mortar samples were also removed for standard wet chemical analysis. Recommendations were provided for brick replacement and mortar replication mixes.

On the interior of the prison building, plaster and paint finishes were sampled in public and non-public spaces including the rotunda, lunchrooms, and cell blocks. Sample chromo-chronologies were studied and color matches were provided for the earliest existing finishes. 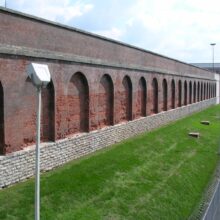 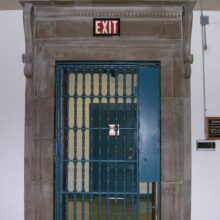