The Soldiers’ and Sailors’ Memorial Arch, located in Brooklyn’s Grand Army Plaza, was completed in 1892. Several large statuary groups and a number of smaller bronze reliefs were added to the arch between 1892 and 1901. The arch was built to honor those who fought and died in the Civil War. Frederick MacMonnies won the commission to create the magnificent groups for the two Union services and the triumphant quadriga that surmounts the arch. These bronze groups depict dozens of figures, each carefully detailed and accurate to the buttons and rifle hammers. Reliefs of Lincoln and Grant by McDonough and Eakins were also included in the scope.

Nearly one hundred years later, during the summer of 1999, Senior Conservator Mark Rabinowitz teamed with a group of student interns to conserve the statues under the auspices of the City Parks Foundation. Investigation work was also done regarding the history of the work and the appropriate patina or color for the restored statuary. All missing, bent or broken parts were noted and the overall surface deterioration was assessed in a complete condition assessment. Missing and damaged elements were restored or re-created. All bronzes were cleaned of surface soiling and corrosion and re-patinated to match the original artist’s intent. They were then coated to preserve them from future deterioration. Adjacent stonework was also cleaned. 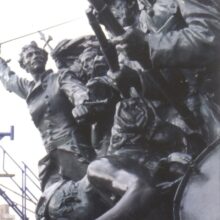 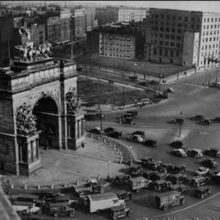 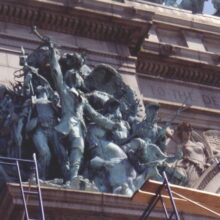 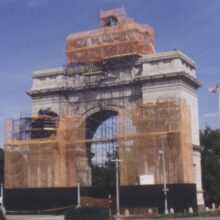 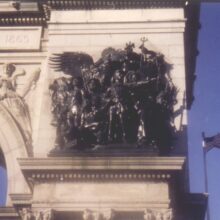