The Miami Beach Community Church was one of the early structures built during the initial phase of development of the barrier island in 1920-21. Constructed of concrete, on land donated by Karl Fischer, the church featured decorative cast-stone pilasters and rose-window surrounds in the Spanish Revival style that characterized Miami Beach before the area became synonymous with Art Deco. Sited on Lincoln Road, the church remains central to the vibrant architectural vocabulary of this major destination.

More than 80 years of exposure to the marine air, punctuated by periods of emersion from hurricanes and floods, lead to extensive damage to the cast stone. The cast stone, intended to resemble the local Coral Stone from which it is cast, was susceptible to both salt exposure and carbonation of the cement paste. The embedded iron reinforcing bars were no longer stable and their rapid corrosion was causing extensive cracking of the decorative elements.

We were contracted by the church to assess the damage and determine a restoration plan. The condition of each block was surveyed, and cracks, losses, and deterioration were noted on the Architect’s base drawings. Core samples were taken from cast stone units and concrete walls and were subjected to a variety of testing which ultimately revealed sodium chloride salts to be the cause of the deterioration. We then developed a restoration plan and budgetary cost estimate for the recommended work. The church is raising funds toward implementing the specified treatment. 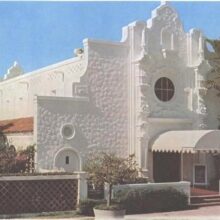 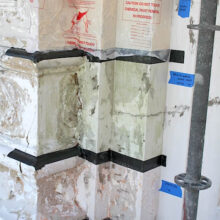 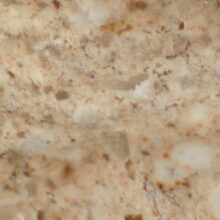 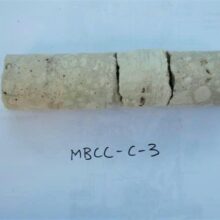