The bronze statue depicts a seated Homer — the blind poet who is credited with writing The Iliad and The Odyssey– and his young attendant, holding a lyre. The instrument would have been played to accompany the recitation of epic poetry in ancient Greece. The figures are mounted atop a grey marble base set within the green at the foot of the Lawn at UVA. The monument is in good condition, although it is beginning to show signs of wear from climbing and misuse, including the loss of the strings on the lyre. At the base, the front panel has been pushed inward several inches so that it is no longer flush with other stones. There was also a small loss and general darkening of the stone from weathering.

We were engaged to clean and repair the statue as part of a larger restoration project of UVA’s outdoor works. The entire sculpture was washed and the coating renewed to provide protection in its outdoor environment. Replacement lyre strings were fabricated and installed, then replaced again as vandalism made necessary. On the stone, the marble panel was repositioned at the appropriate depth, the damaged corner repaired, and a color enhancer was applied to restore the base to its original color. 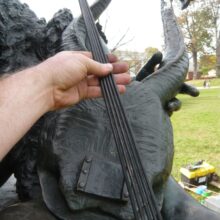 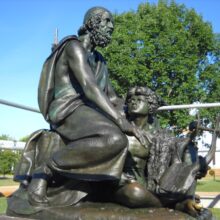 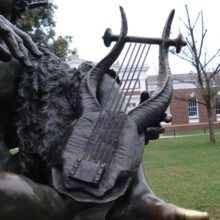 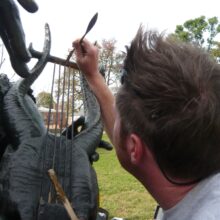