The New York Public Library’s Stephen A. Schwarzman Building, located at Fifth Avenue and 42nd Street, is a classic example of Beaux Arts architecture. The structure was designed and built by the firm Carrère and Hastings between 1902 and 1909. It was constructed in response to New York’s ever growing population, through the consolidation of three existing libraries: The Astor Library, opened in 1854; the Lenox Library, opened in 1877; and the Tilden Trust, a collection of books donated by politician Samuel Jones Tilden upon his death in 1886. The Celeste Bartos Forum was originally designed as an open shelf circulation room. The New York Public Library was added to the National Register for Historic Places in 1965.

EverGreene was brought in by the Beyer Blinder Belle Architects & Planners to conduct a paint analysis, finishes investigation, and cleaning tests for selected features of the Stephen A. Schwartzman Building. The goals were to support renovation efforts by investigating and documenting the historic color palette of the selected cast iron features in the Bartos Forum and to carry out cleaning tests on the marble walls and bronze inlay.

Microscopy analysis determined that the original finishes were intact on the ornament beneath subsequent coats of paint.  A universal protective layer of red lead was noted to have been applied across the metal features, which subsequently finished with a curated color palette of glazes to enhance the contrast between the relief details and their backgrounds. Munsell color matches are identified for the historic finishes. A hand-tinted historic photo confirms the results of the investigation.

A series of tests were carried out to determine the best method of cleaning to retain the inherent properties of the stone while removing obtrusive soiling from the surface. Based on cursory observations on the soiling, the marble has an even coating with surface deposits of dust and possibly nicotine. 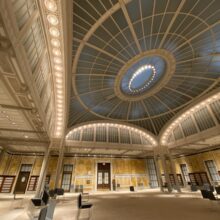 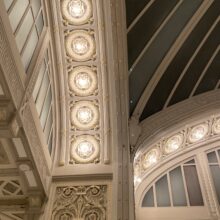 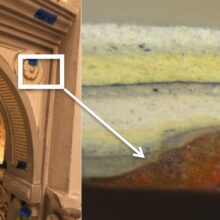 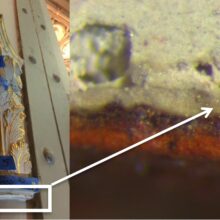 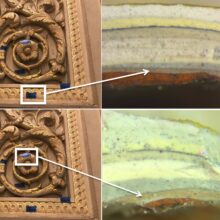 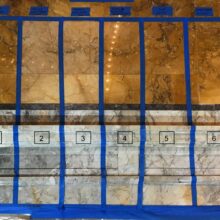 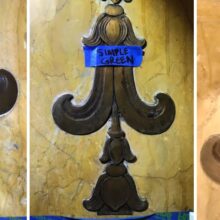 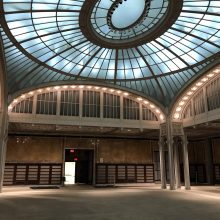 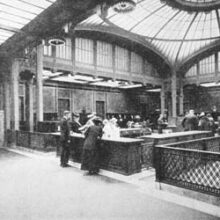 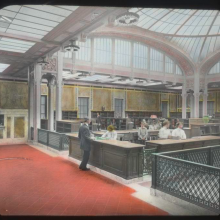