EverGreene’s recurring work at the New York Public Library is a partnership between the Library’s stewardship and our shared commitment to excellence in fulfilling the original design intent in maintaining the historic Stephen A. Schwarzman Building.  In 2019 EverGreene restored three vaulted stair ceilings in the North Wing and McGraw Rotunda to the grandeur intended by architects Carrere and Hastings in 1911. The work encompassed investigation of historic finishes, development of color palettes and stencil patterns, ornamental plaster repair, decorative painting with polychromatic accents, metallic leaf, stenciling, and glazing, and marble cleaning.

EverGreene Conservators untangled a mystery at the New York Public Library Stephen A. Schwarzman Building’s McGraw Stairs’ vault ceilings. Our conservators collected 20 samples from the south rotunda and made three (3) large reveals to expose the original stencil design found in a historic photo of the space. They discovered that these historic stencil designs were similar to the stenciling found in both the Rose Reading Room and the Bill Blass Room within the Library. The conservation team’s findings served as a design roadmap for our design team and decorative painters as they restored the historical paint. Paint colors and glazes were matched to the historic palette and culminated in the ultimate restoration of the ceilings, which now match the architectural context and intent of the space.

North Stair
Beginning with the North Stair, where a scaffold was in place below the vaulted ceiling, EverGreene conservators analyzed paint samples and performed exposures to identify the historic color palette behind post-historic white paint at the cove and laylight.  EverGreene’s Design Studio prepared a color palette and digital renderings, followed by a painted mockup on-site for the Library’s approval. Isolated locations of water-damaged ornamental plasterwork were repaired by selective infill of cast elements and preparation of the surface for repainting.  The extraordinary sculptural quality of
female figures, putti, floral swags, and acanthus vines, is emphasized by a soft base color-glazed in blue and green-grayish tones. The laylight frame and mullions are painted in complementary tones at the apex of the stairway.

McGraw Stairways
The North Stair project prepared the team to plan for a more compressed sequence of operations in the two stair ceilings of McGraw rotunda. Scaffolding was erected for a limited period before the fall programs.  The team had to work quickly to complete the finishes investigation and design development, plaster repairs, and repainting.
The most important discovery was a diaper pattern on the vaulted spandrel,  long ago hidden, but glimpsed in the corner of a black-and-white archival photograph. Based on that clue, our conservators made three large reveals to expose the original stencil pattern and polychromatic decorative scheme behind post-historic paint and analyzed twenty paint samples, to prepare documentation for design development.  The stencil pattern is similar, but not identical, to the rinceaux panels in both the Rose Reading Room and the Bill Blass Room within the New York Public Library. Paint colors and glazes were matched to the historic palette, which now fully represents the architectural context and intent of the space.

The work on the New York Public Library ceilings had to be performed in a space that is occupied by the public and library staff, traversed by thousands daily below the scaffold.  Our conservators and decorative paint studio collaborated on extensive technical materials research and testing in the studio to recreate the finishes with a low-VOC system, minimizing odors. The process was particularly challenging because of the complex layers of metallic paints, composition leaf, varnishes, and glazes in base colors, patterns, and accents.

EverGreene assembled a team of its most experienced gilders and decorative painters to execute the scheme with utmost attention to excellence and within the library’s schedule.  The restored decorative scheme replaces post-historic gold paint on three-dimensional ornament and moldings with composition leaf, varnish, and glaze; corrected the brown and olive accent colors; and recreated the stencil pattern in metallic paints, glazes, and leaf on the curved vault panels.

The dome’s curved panels, embellished with trophies in relief, represent the attributes of the arts and science. One pair feature an Ionic capital, the head of Minerva, and an artist’s palette and brushes. The other pair presents symbols of a globe, anchor, rudder, hammer, and an open book. Between the panels are emblems of music, sculpture, painting, and architecture. 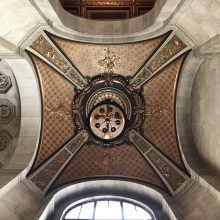 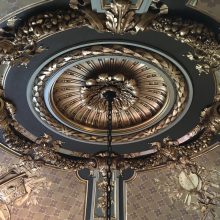 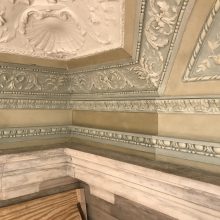 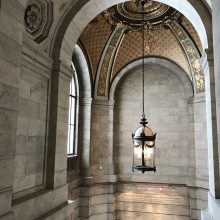 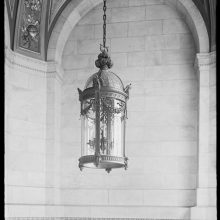 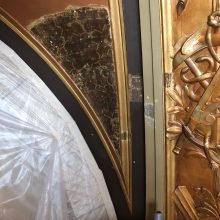 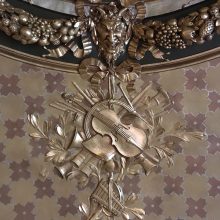 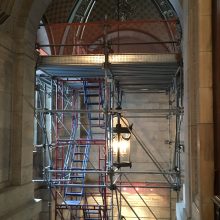 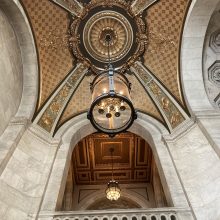 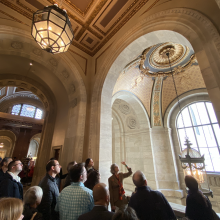 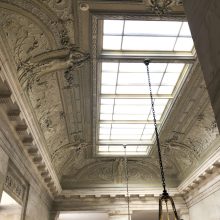 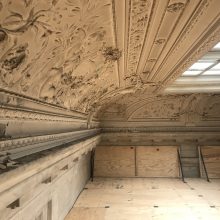